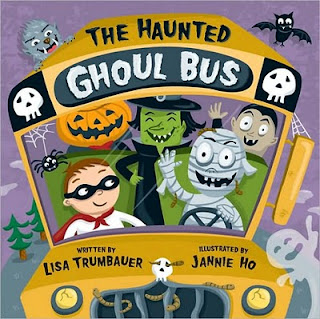 Right at the beginning of September, I went and grabbed a few Halloween books from the library before all of the good ones were taken.  We ended up with a good bunch, starting with The Haunted Ghoul Bus

, written by Lisa Trumbauer and illustrated by Jannie Ho.

A young boy, dressed up for Halloween, is waiting outside for the school bus.  He's not really paying attention and ends up jumping on the Ghoul Bus instead!  At first he's terrified by the mummy driver and the monster children--werewolves, vampires, skeletons, witches and more--but then he notices that they are having fun just like he and his friends do on the way to school.  Eventually he joins in the fun and ends up dancing and telling stories to his new spooky friends.  He's only disappointed when the driver won't let him off at the Ghoul School!  He gets taken back to his own school where he tells his friends of his amazing adventure.

This is a really cute book with wonderful illustrations.  The characters are cute with just a touch of the gruesome (as you can see by the worms crawling out between the mummy's bandages on the cover!).  The pages are thick and have raised images that are glossy on a matte background which makes this book seem just a little bit more special.  I was also surprised by the length of this one.  At twenty-four pages it certainly seemed a bit longer than your average picture book but was well worth the extra time! 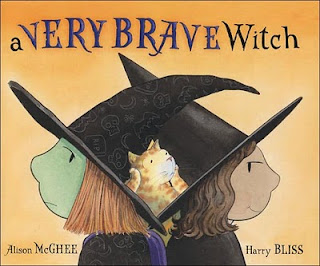 Our next choice was the very cute A Very Brave Witch

by Allison McGhee and illustrated by Harry Bliss.  A young witch tells the story of how her community is terrified of humans and all of the unnatural things they do.  They don't wear pointy hats, they are afraid to fly and they aren't green!  Eeew!  But the witch girl is still curious about humans and she heads out on Halloween night to find some.  Not only does she find that humans aren't scary but that they aren't half bad as friends either.

This is a fun story about judging others for yourself and not believing everything you've been told.  It's a great social lesson told in a non-standard way -- as a Halloween tale!  The illustrations are very engaging and there are some jokes for the adults in there too -- like a copy of Munch's The Scream on the witches' wall and a display of "human politician masks" featuring Nixon and Carter.  Too silly! 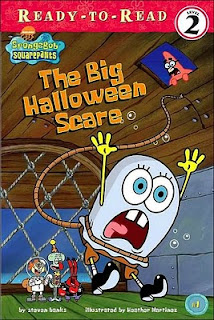 Finally, we turned to the current favorite around the house, Spongebob Squarepants, and endured The Big Halloween Scare

.  This story is taken directly from an episode of the show so Z was quite excited.
Spongebob is almost ready to head out on Halloween but he doesn't have a costume.  He wants to be really scary and Patrick suggests he wear a ghost costume.  Spongebob puts on a sheet and some wooden clogs, goes out and soon finds that his costume isn't quite as terrifying as he had hoped it would be.  Eventually he unwittingly scares everyone in a really gross way.
As you can probably guess, there isn't really a point to this book.  It's just a bit of fun for a holiday that has no real point any more either!

For next week, we are planning to share a special book -- one of my childhood favorites that I was able to buy for Z this year.  He absolutely loves it already!

Sharing the scary,
K and Z


Support our site and buy The Haunted Ghoul Bus

, A Very Brave Witch, and

The Big Halloween Scare on Amazon or find them at your local library.  We borrowed our copies from the library.