Have I ever told you that Z loves to be scared?  He asks me to hide around the corner and then pop out at him and say "boo".  It's a little strange but it so happens that I like scaring people so we're a good match!  Anyway, sometimes I think that Z likes Halloween even more than Christmas.  We went to B&N the other day and he got really excited about the big central display of spooky books.  He said something like "I love books about monsters!  I love books about bats!  I love books about hiccups!"  Um, yeah. 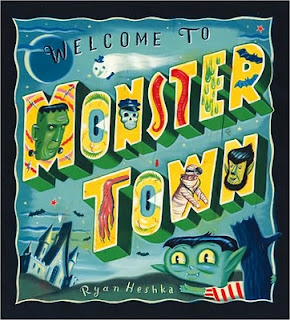 is a kitschy and fun picture book by Ryan Heshka.  It has the most brilliant colors and is a cute little romp through a night in the life of Monster Town.  The pictures have a lot of pop culture references for adults -- "Lugosi Elected" on the front page of the Monster Town Gazette, letters spilled by the mail carrier that are addressed to P. Lorre, B. Rathbone and L. Chaney -- but they don't detract at all from the simpler pleasures of this book.

Z and I were just a little disappointed that this one was written for quite a young age group.  It has one simple descriptive sentence per page -- although the vocabulary level makes this a "read-it-to-me" sort of book.  Still, it's fun and a great choice for the season.  Z's favorite resident of Monster Town was the "giant gorilla" (King Kong) that builds skyscrapers.  Mine was definitely the giant squid that runs the diner -- even though everything he cooks seems to be green or inky blue!  Still, I can't resist the temptations of a midnight brunch. 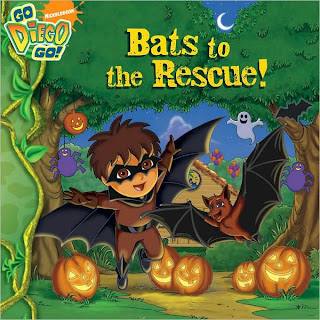 How cute is Diego in his bat costume?  Whenever Z is in a reading slump, he tends to turn to books based on his favorite television characters.  Even though he hasn't watched Diego in months, he still loves a good adventure with this old friend.  In Bats to the Rescue!,  Diego and his sister are setting up trick-or-treating booths for their party.  The llamas that are bringing the treats get stuck behind a broken bridge and, of course, Diego goes off to find a way to help with Freddie the fruit bat.  As you can expect, they use Freddie's special skills to help the llamas.

One thing I'm always careful about with Z is not to label any foods or animals as "yucky" or "scary".  I want him to form his own opinions and be open-minded about things that are new and different.  I love books like this that make bats, especially harmless ones like fruit bats, something to celebrate instead of something to fear.  Even if your child doesn't watch much television, the Diego books are a great way to explore the unique skills of animals. 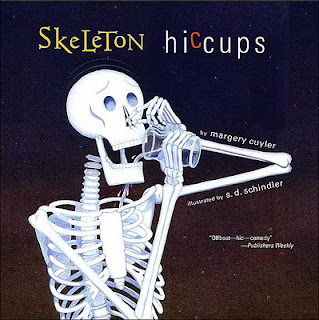 And finally we get to the hiccups.  I know you've been thinking "Does Z really love books about hiccups?"  Well, yes, he does!  He thinks hiccups are hilarious.  We've already spent some good reading time with The Hiccupotamus

(by Aaron Zenz) and now we're getting seasonal with Skeleton Hiccups

by Margery Cuyler and illustrated by S.D. Schindler.

This book had me laughing at the cover illustration of a skeleton attempting to hold his non-existent nose.  Z loved the constant "hic, hic, hic" on each page.  The first half of the book shows how the hiccups are an inconvenience for Skeleton.  Then, as Skeleton tries to get rid of his hiccups with the help of his friend Ghost, we see many of the wives' tales about how to get rid of hiccups and why they might not be effective for a skeleton.  "Press your fingers over your eyeballs" doesn't work so well when you have empty sockets!  And Ghost's attempt to scare Skeleton just doesn't work.  This is a silly but fun book that will appeal to a wide age range of kids.

We grabbed a few seasonal books from the library as well so we'll have more fun stories for you next week!


Support our site and buy Welcome to Monster Town

, Bats to the Rescue! and

Skeleton Hiccups on Amazon or find them at your local library.  We bought our own copies of these books.