New Release: The Tower, The Zoo and The Tortoise 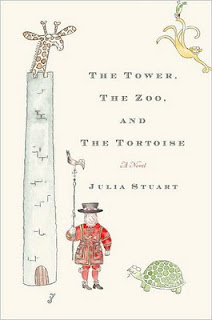 As a break from my towering RIP stacks, I decided to squeeze in a read of Julia Stuart's new novel, The Tower, The Zoo, and The Tortoise

(Balthazar Jones and the Tower of London Zoo in the U.K.).  I was a bit hesitant when I saw that Teresa quit reading it halfway through because we have mostly similar tastes.  However, this will be one where we will have to disagree because I thought it was charming and I finished it with a smile on my face.

Balthazar Jones is a Beefeater at the Tower of London.  He's been having trouble caring about his job ever since his son died and his marriage is also suffering.  He's not sure how to turn things around when a surprise job lands in his lap -- the Queen wants to relocate the animals that she has received as gifts from various heads of state from the London Zoo back to the Tower, recreating the menagerie that once existed there.  Balthazar is assigned to be Keeper of the animals based solely on the fact that he is the owner of the world's oldest tortoise, Mrs. Cook, who is one-hundred and eighty-one years old.  While following Balthazar's adventures in zookeeping, we also spend time with some of the other residents of the Tower and experience many highs and lows with them.

This is a quirky but thoughtful novel.  It had a few flaws (for example, repetitive descriptions of locations and items) that I'm hoping were corrected in editing.  The details of life working at the Tower of London and also the London Underground Lost Property Office (where Balthazar's wife works) were interesting though presumably exaggerated a bit!  And while there were certainly things that seemed a bit too convenient or not very likely, I was able to suspend my disbelief and truly enjoy this story.  It was the perfect escape from my recent dark reads.


Support our site and buy The Tower, The Zoo, and The Tortoise on Amazon or find it at your local library.  We received an advance reading copy from the publisher but plan to acquire a final copy of our own.