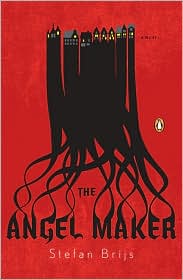 A real surprise for me this year was The Angel Maker

by Stefan Brijs.  I was expecting a horror novel about misshapen monster children and the mad scientist that brought them to life.  Instead, I got a thought-provoking (yet still quite horrific) look at human cloning in the hands of a doctor with a skewed world view.  I suppose that many times true horror comes from the realm of the possible.

Victor Hoppe was born in the small town of Wolfheim (a fictional town near Vaalserberg, the intersection between Belgium, Germany and The Netherlands) but was immediately rejected by his mother and sent off to a local religious asylum because of his terrible cleft palate.  The nuns had surgeries done to mostly correct the issue but Victor stayed on when they assumed that he was also an imbecile.  However, when it turned out that Victor was instead autistic and quite bright but just not very verbal or social, his father took him back home.  He wasn't there long though before he was sent off to a religious boarding school.  These events gave Victor a skewed view of religion and eventually he turned to medicine and genetics as a way to beat God at his own game -- a game that seemed to him only to include pain and suffering.  Unfortunately Victor's lack of social mores and moral judgment leads him down a slippery slope where humans are treated no different from other medical test subjects like mice.

This novel really blew me away.  It took some time to get used to the fact that it changes narrators, point of view and time periods quite frequently.  At first I thought it was a problem with the translation from Dutch but then it appeared to be by design.  Hoppe's actions are horrific and yet you can easily sympathize with his motivations and understand where things went wrong in his mental development.  This was a mind-opening read and I found it even more fascinating after reading Spook.  Both books addressed the intersection between science and religion but in vastly different ways.  While Spook felt more light-hearted and the results of the experiments seemed quite inconsequential, The Angel Maker was the opposite with intense and painful decisions leading to suffering and tragedy.  It's hard to craft a coherent review because this book hits you with new thoughts and feelings each time you think about it again.  It's strange then to admit it but I really did enjoy this book and found it to be quite compelling.


Support our site and buy The Angel Maker on Amazon or find it at your local library.  We own our own copy.