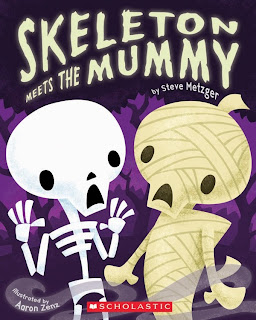 We couldn't resist buying a couple more Halloween titles this year before the big day.  The first was one we picked up from the Scholastic Book Club and we both love it!  Skeleton Meets The Mummy

is written by Steve Metzger and illustrated by Aaron Zens.

The skeleton's name is Sammy and he's heading out on Halloween night to go trick-or-treating but first his mom is making him deliver a thermos of soup to his grandma.  Of course the closest path goes through the woods and Sammy gets a bit creeped out along the way.  When a mummy shuffles into view, Sammy starts running as fast as possible!  The mummy starts chasing him and eventually Sammy decides to do the only thing that stops a mummy -- unwrap him.  The result is quite cute!

Z loves this one a bunch.  We both love the drawings and the story is scary and cute at the same time.  I think that books like this are great for younger kids because they get to experience a little bit of fright and then are shown that there's nothing to be afraid of after all. 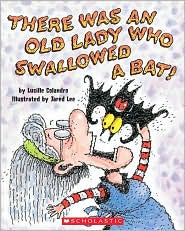 The second book is one that we found at Target and is a haunting take on a classic story -- There Was An Old Lady Who Swallowed A Bat!

by Lucille Colandro and illustrated by Jared Lee.  I'm sure I don't need to explain the plot of this one to anyone.  The old lady starts with consuming a bat, moves on to an owl and a cat, fills up a little more with a ghost, a goblin and some bones and finishes up with a wizard.  What happens then?  She yells "Trick or Treat!"

Okay, so it doesn't quite pack the punch of the original that ends in the old lady's demise but it's fun nonetheless.  It has some cute rhymes and a very spooky look.

By the way, did you see that Scholastic celebrated their 90th anniversary this week?  We sure appreciate them as the publisher of both of these books and many other affordable titles!  We gathered up the Scholastic books we had in the house the other day and had something like 35 of them.  Happy anniversary to a strong supporter of literacy and children's literature!

She died, of course,
K and Z


Support our site and buy Skeleton Meets the Mummy

and There Was an Old Lady Who Swallowed a Bat!

on Amazon or find them at your local library.  We bought our own copies of both.
Posted by Kristen M. at 12:03 AM