Do Unto Goldfish and Dragons

We have had some fantastic picture books in the house recently.  Let's take a look at three of them -- 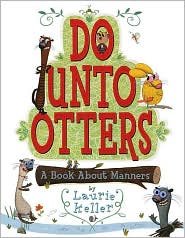 Do Unto Otters: A Book About Manners

is a cute take on the golden rule, written and illustrated by Laurie Keller.  Mr. Rabbit has some new neighbors, a family of otters, and he is worried that they might not get along. His owl friend relays an old saying to him: Do unto otters as you would have otters do unto you.  Mr. Rabbit decides that he would like to be treated in a friendly way with politeness, honesty and consideration.  And a bit of cooperation, fair play and sharing wouldn't hurt either!  And while he's making his list, he also adds "won't tease", apologize and forgive.  I think he's on his way to being a great neighbor himself!

This book is chock-full of adorable puns and cute animals with large eyes.  Keller's sense of humor is fun for kids and adults and the illustrations are full of tiny details that also add to the silliness of this book.  And what better way to convince a kid to do something than to make it seem fun, right?  From the universal "magic word" to being on time, this book runs the gamut of kid manners and would be an awesome addition to any home or school library.  Just be sure that the kids remember that these rules aren't always meant to be taken literally.  Including "everyone (even bees)" in your playtime might work for otters but not so much for people! 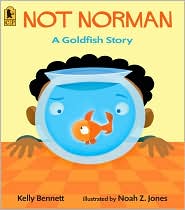 Another favorite this week is Not Norman: A Goldfish Story

, written by Kelly Bennett and illustrated by Noah Z. Jones.  Z read this one out loud to me the other night and we actually spent the entire evening (and part of the next day) discussing his new imaginary goldfish, I.B.

The little boy in the book receives Norman for his birthday.  He didn't want a goldfish but that's what he got.  He was hoping for a pet that was a bit more interactive, even if Norman perks up when his bowl gets cleaned.  At Show-and-Tell, the other kids all bring in interesting pets but the boy only has Norman.  There's a ruckus in the class during the boy's presentation and nobody listens to what he's saying -- nobody but Norman.  In fact, Norman seems to be a calm and stable friend.  Maybe he's worth keeping after all.

This is such a cute book.  Norman is an adorable little fish and I'm glad that everything worked out with the boy.  Z loved it too.  He invented an imaginary pet (he's not fond of the two cats we already have) and drew a picture of him on the iPad.  He's got a great tank with a plant, red gravel, a skull and a diver!  He's my favorite pet in the house right now too. 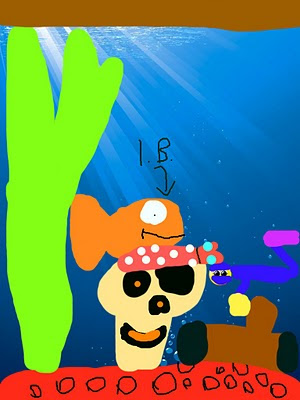 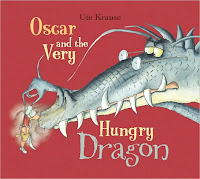 by Ute Krause.  This is a very fun fairy tale-ish story about a town that has been losing their princesses to the peculiar appetites of a local dragon.  In fact, they've now run out of princesses and are moving on to sending children up the hill to be eaten.  Poor Oscar's name is the first drawn and he sets off to his demise.  The dragon is disappointed at getting such a scrawny morsel for his meal and Oscar sees his chance.  He offers to fatten himself up with some of the amazing cooking he learned from his mother.  Of course, Oscar is also hoping that the dragon might find the tasty treats a bit more tempting than little boy.  Will he be successful?

This is a picture book with a bit more text than some others, great as a read-to-me or for emerging readers.  And it has some great use of caps ("NOOO AND NOOO AGAIN!") which Z particularly loves reading out loud.  He's a big fan of shouting in books.  As a side note, this is a translated picture book (from German) and it's rather well done.  I didn't even realize it until I looked at the publisher's page later.  In fact, NorthSouth's specialty is bringing international children's books to the U.S. and Canada.  Awesome!

Making new friends of all sizes,
K and Z


Support our site and buy Do Unto Otters: A Book About Manners

, Not Norman: A Goldfish Story

and Oscar and the Very Hungry Dragon

on Amazon or find them at your local library.  We borrowed copies of these books from the school library and the public library.
Posted by Kristen M. at 12:27 AM