"On an island so far north that it snowed from September to April, a boy named Frederik kept himself warm by keeping a secret." 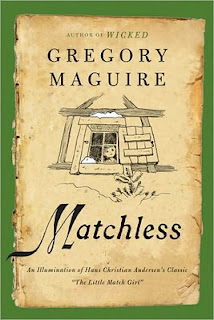 by Gregory Maguire, subtitled An Illumination of Hans Christian Andersen's Classic "The Little Match Girl".  This is a small little volume that takes the story of The Little Match Girl, moves it from New Year's Eve to Christmas Eve and adds a surrounding story to it to give it a context that will move even the most cynical reader.  It was originally read aloud on NPR by the author in 2008.
I hadn't read Andersen's original story (read it online) in many years and couldn't remember much of how it was told except for the tragic ending.  It begins like this --

It was terribly cold and nearly dark on the last evening of the old year, and the snow was falling fast. In the cold and the darkness, a poor little girl, with bare head and naked feet, roamed through the streets. It is true she had on a pair of slippers when she left home, but they were not of much use. They were very large, so large, indeed, that they had belonged to her mother, and the poor little creature had lost them in running across the street to avoid two carriages that were rolling along at a terrible rate. One of the slippers she could not find, and a boy seized upon the other and ran away with it, saying that he could use it as a cradle, when he had children of his own.

Matchless adds the story of that boy -- the one who took the lost slipper home.  He is named Frederik and he lives out on an island in the harbor of a northern town.  The island is connected to the land by a stone walkway.  Frederik lives there with his mother and they are poor but surviving.  Frederik has a secret miniature town in the attic which he collects bits and pieces around the real town to create.  This is why he is anxious to get the slipper when he finds it in the street.

The nameless Match Girl's fate remains the same in her portion of this story but it is sandwiched between Frederik's story, one of hope and purpose even after devastating loss.  This is a bittersweet story that reminds readers to remember those less fortunate than they and to temper their indulgences with gratitude and charity. It is a story that I'm sure I will find myself reading each year as the holidays approach.


Support our site and buy Matchless: A Christmas Story

on Amazon or find it at your local library.  We bought our own copy.
Posted by Kristen M. at 12:08 AM