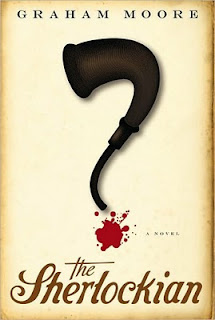 , is a well-researched and imaginative journey into a brief period in the life of Arthur Conan Doyle and also into the modern community that worships his most well-known creation, Sherlock Holmes.

This novel alternates chapters between the present and the past.  The present day story is that of Harold White, a twenty-nine year old researcher who is inducted into the prestigious Baker Street Irregulars at their annual meeting in New York City.  His dedication to Conan Doyle and deep knowledge of Sherlock Holmes is quickly put to the test when a fellow scholar is found dead after announcing he has found the single missing volume of Conan Doyle's journal.  Is White up to the task of finding the now missing-again journal and identifying Alex Cale's murderer?

The story in the past is the account of what happened to Arthur Conan Doyle (and his friend Bram Stoker) in August 1893, when Doyle killed-off the beloved Holmes, and then from October through December of 1900, the period covered in the missing journal.  What happened to the author during this time that led him to join forces with Scotland Yard and eventually resurrect Sherlock Holmes?

As is the case many times with dual setting novels, one of the narratives in this book is stronger than the other.  The Victorian one is quite wonderful and I plan on picking up Daniel Stashower's biography of Conan Doyle to fill in the gaps in my knowledge.  Moore did a wonderful job with the Victorian voice and the story that unfolds is really well done.  It explores Conan Doyle's ambivalent feelings about his creation, his personal life and that of his friend and fellow (but unappreciated) author, Stoker, and the women's suffrage movement of the time.  It also touches on the workings of Scotland Yard at the time -- a subject that really fascinates me.

And luckily, though not quite as good as the past narrative, the present one gains momentum as the story moves forward and I found myself strongly invested in Harold's plight as well.  He is a sympathetic but odd character and you really hope that things work out for him.  I think that Moore has a fantastic career ahead of him if he only improves from the high bar that has been set by The Sherlockian.


Support our site and buy The Sherlockian

on Amazon or find it at your local library.  We received an advance reading copy from the publisher.
Posted by Kristen M. at 12:11 AM