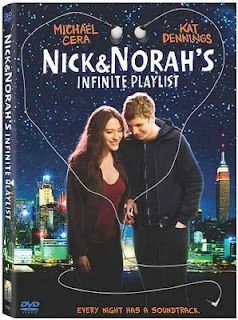 for the longest time because I was annoyed that they copied the names of my beloved Nick and Nora from The Thin Man movies. Then one night I was awake far too late, nothing else was on and so I stayed up for hours longer watching this movie. It's not an all-time favorite but there are things about it that I love (like Kat Dennings and the Yugo). It's a story of second chances, accidental love-at-first-sight and choosing your best future. I've watched it once or twice more in the wee hours of the night/morning (because I can't stomach the whole Caroline and her gum thing when I'm fully awake) and enjoyed it each time. Then, inevitably, I figured out it was a book.

In fact, I figured that it was probably the type of book that wasn't really for me -- me being stodgy and married and from the opposite coast and all. And then I saw the book

for a dollar at Half Price Books and couldn't resist. I breezed through the short novel--written by Rachel Cohn and David Levithan as alternating chapters between the titular Nick and Norah--and have made it through relatively unscathed and of the opinion that this book was actually more for the adults than the kids. It's quite full of profanity and sexuality and was surprisingly lacking in music. The kids talk like they're in their twenties instead of like teenagers. Money keeps magically appearing for these kids who don't seem to have jobs. And yet, it made me a bit nostalgic for the problems of teens -- the wondering, the firsts, the fights, the friendships. That's why I think that adults might ultimately find it more interesting than teens.

The movie and the book turned out to have little in common and, though I appreciated the book, I have to say that I prefer the movie. I like the story line that they created, the different direction the characters took at times and the more dastardly exes. It was more of The Odyssey and less of The Breakfast Club.

Looking back on my relatively quiet teen years with relief,
K

(the movie) on Amazon or find them at your local library. I watched the movie on cable and bought a copy of the book.
Posted by Kristen M. at 12:32 AM