Upcoming Release: The School of Night 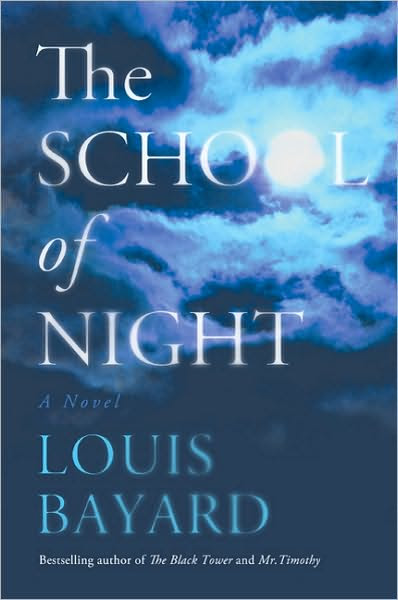 Out next week is the latest novel from one of my favorite authors, Louis Bayard. The School of Night

is a pair of stories, taking place in 2009 and in seventeenth century England. The modern story is that of Henry Cavendish, an ex-academic who becomes executor of the estate of a former college friend and book collector who has apparently just jumped from a bridge -- apparently because no body has been found. At the funeral, Henry is approached by Bernard Styles, an older British man (and also a collector) who says that the dead man, Alonzo Wax, stole a document from him. Styles pays Henry a large sum of money to retrieve the document, the second page of a letter that is signed by none other than Walter Ralegh (also spelled Raleigh). Of course, it isn't as simple as all that and things quickly get serious.

In the narrative from 1603, we meet Thomas Harriott, the recipient of the letter from Ralegh. Harriott is a scientist and scholar who has been labeled an atheist and has narrowly escaped punishment by Queen Elizabeth only through the protection of titled friends. What secrets did Harriott and his friends have and did they have anything to do with a hidden treasure?

There was a lot to like about this novel. It was exciting, with a lot of twists and turns, and the history really came alive through Bayard's prose. However, I think that the novel suffered a bit under my own anticipation based on Bayard's previous novels. He has written some amazing characters in the past and I just felt that the ones in this book weren't as strong. I never really connected with Henry or any of the other characters in the present. Harriott was the most developed character but unfortunately his share of the story was smaller. I would have loved a novel just about this scientist and his friends, Walter Ralegh and Christopher Marlowe. However, if I hadn't had the expectations that I did, I think I would have enjoyed this novel more. Despite everything, I got caught up in both of the stories and was mentally exhausted (in a good way) by the time the novel ended.

Returning to the light of day,
K


Support our site and buy The School of Night

on Amazon or find it at your local library. We received an Advance Reader's Edition for review.
Posted by Kristen M. at 12:16 AM