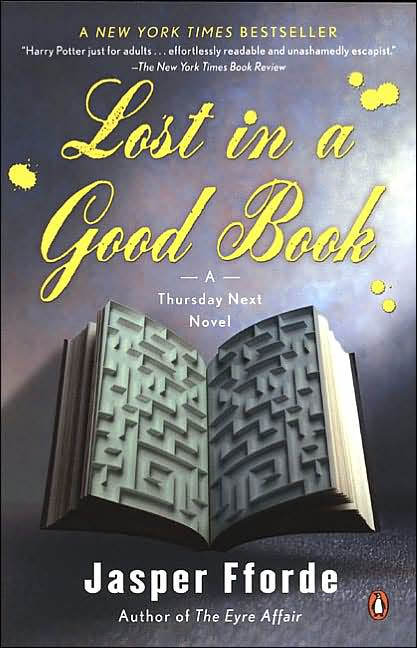 Lost in a Good Book steps up the word play and silliness of this series but there's one idea that gets me thinking every time.


It was time to go and visit the closest thing to the Delphic Oracle I would ever know: Granny Next.
...
"Do you want to know a secret, young Thursday?" she asked ... "I am cursed to eternal life!"
...
"I got mixed up with some oddness in my youth, and the long and short of it is that I can't shuffle off this mortal coil until I have read the ten most boring classics."
I looked into her bright eyes. She wasn't kidding.
"How far have you got?" I replied ...
"Well, that's the trouble, isn't it?" she replied ... "I read what I think is the dullest book on God's own earth, finish the last page, go to sleep with a smile on my face and wake up the following morning feeling better than ever!"
"Have you tried Edmund Spenser's Faerie Queene?" I asked "Six volumes of boring Spenserian stanza, the only saving grace of which is that he didn't write the twelve volumes he had planned."
"Read them all," replied Gran. "And his other poems, too, just in case." (page 134-135)

..."can you think of any books that might be included in the 'ten most boring classics'? I'm about ready to go."
"Gran!"
"Indulge me, young Thursday!"
I sighed.
"How about Paradise Lost?"
Gran let out a groan.
"Awful! I could hardly walk for a week afterwards--it's enough to put anyone off religion for good!"
"Ivanhoe?"
"Pretty dull but redeemable in places. It isn't in the top ten, I think."
"Moby Dick?"
"Excitement and action interspersed with mind-numbing dullness. Read it twice."
"A la recherche du temps perdu?"
"English or French, its sheer tediousness is undiminished."
"Pamela?"
Ah! Now you're talking. Struggled through that when a teenager. It might have had resonance in 1741, but today the only resonance it possesses is the snores that emanate from those deluded enough to attempt it."
"How about A Pilgrim's Progress?"
But Gran's attention had wandered. (page 234-235)

So, what books would you try if you were trying to identify the "ten most boring classics"? Or have you read one already that you're sure should be on the list? I know many of you would choose Dickens but I have yet to read one of his novels that I would put on the list. Maybe I've just avoided the boring ones so far! I think I probably would try Don Quixote -- I wasn't able to get through that one when I tried it last. The Grapes of Wrath would be on my list as well. 20,000 Leagues Under the Seas is redeemed by a few interesting scenes but the majority of that one gets the big BORING stamp on it. And oh, to have my lifespan determined by which books I chose to read ...

Falling into The Well of Lost Plots,
K
Posted by Kristen M. at 12:15 AM