Fforde-a-Thon Book 5: Thursday Next in First Among Sequels 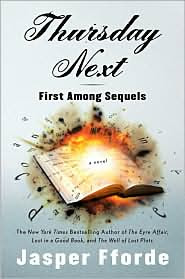 Thursday Next in First Among Sequels is easily my least favorite in the series. It feels "phoned in" in a way. There's a lot of recapping and repeating that becomes even more evident while reading the books all in a row. The plot doesn't even pick up until the middle of the novel. Luckily, the start of the sixth book is quite good so far so it seems that Fforde will redeem himself in One of Our Thursdays is Missing.


If someone wrote a fictional account of your life, what traits would they exaggerate to draw in readers? I'm not sure I want to answer this question myself! I hope the author would decide to take me from average honors student to super genius. Maybe my time cleaning fish tanks at the Seattle Aquarium could be turned into an awesome, death-defying animal rescue plot line. I just wouldn't want my introvertedness magnified into full-blown agoraphobia or something!