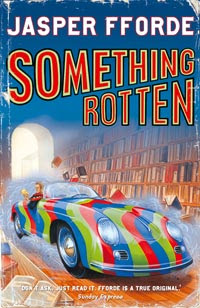 In the next book in the Thursday Next series, Something Rotten, Thursday returns to the real world after spending almost three years in the BookWorld. One of the things she has to do when she gets back is track down a Shakespeare clone (which she didn't previously know existed) who can help reverse the merging of Hamlet and The Merry Wives of Windsor into The Merry Wives of Elsinore before the plays become irretrievably intertwined. If cloning of historical figures were possible, who would you hope would be copied? Or is cloning humans something that should never happen? Would the world be better off with a couple hundred Mother Teresas back on the job? Should we clone a few John Adamses to straighten out politics again? Could we ever have too many Cary Grants?

Considering the options (just in case),
K
Posted by Kristen M. at 1:18 PM