Fforde-a-Thon Book 6 and Wrap-Up: One of Our Thursdays is Missing 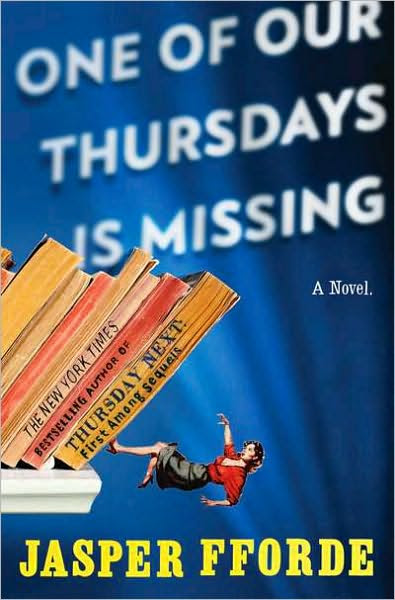 And that's it for my Fforde-a-Thon (which turned into Fforde August). It took about two weeks longer than I thought it would but it led up to a wonderful ending. One of Our Thursdays is Missing is interesting and funny and smart and absolutely one of the best of the series, even considering the real Thursday Next is only in it for a couple of sentences at the end. If you're a fan of this series, you've got to get to this sixth book. Once you're done, I don't think you'll ever read a book the same way again.

Thanks to everyone who commented throughout the month on your own love of this series (especially Tracy and Karen) and the many strange thoughts it spawns and thanks to Tif for finally giving The Eyre Affair a read. I can't wait to see your thoughts on it! And, of course, a million thanks to Jasper Fforde and his endless imagination. To write books that stand up to as many re-reads as I've given some of the books in this series and to have them still offer up something new each time is quite astounding.

Totally stuck on what to read next that isn't Thursday Next,
K
Posted by Kristen M. at 12:39 AM