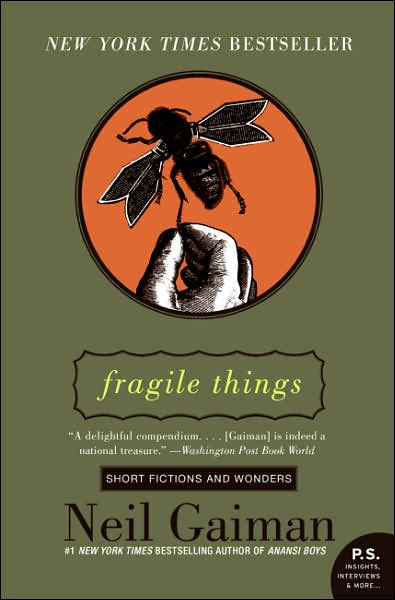 This week just flew by and I totally was not able to do the story-a-day thing. Still, I wrote about each piece after reading it and that seems to have worked okay (except for a lack of good "absorbing" time).

Again, minor SPOILERS so be aware --


From the introduction: "A wodwo or wodwose, was a wild man of the woods." And while it's a very interesting word, I think the key word in the title of this short piece is "Going" because this is really a poem about the transition from a "regular" life to the escapism and communion of the wodwo lifestyle. The narrator talks about what he is leaving behind and the hardships of starting to live off the resources in the forest. At one point, you almost think he will give it up and head back but then he realizes that the spiritual gains outweigh the physical trials. This is a very thought-provoking piece and is an interesting addition to this collection -- though it certainly exposes a few "fragile things".


There was nothing wrong with this story. But I don't like Santeria or zombies and so I didn't really like this either. It was well written but it wasn't for me. It just made me sad and uncomfortable. It's strange because I like fantasy magic A LOT but this particular flavor of New Orleans magic, the kind that is always associated with evil and never with good, just seems pointlessly dark to me -- kind of like the bitter grounds left after brewing strong, black coffee.


The most puzzling thing about this story is the title. Interestingly (and according to the introduction), it wasn't Gaiman's title for the piece. He called it "Afterlife", which makes much more sense to me. This is a brilliant little story that truly proves a well-known quote --

"We are each our own devil, and we make this world our hell." -- Oscar Wilde


This was one story that I wanted to re-read again now that I've finally read American Gods because it's supposedly set in the same world. It turned out to be incredibly disturbing and revolting. I didn't remember much about it as I was re-reading it, which means I probably put it out of my mind, trying to not absorb any of its darkness. Though there were many dark and violent things in American Gods, there was nothing quite like this and for that I'm glad. I'm wondering if there will be anyone in the reading group that truly likes this story.

Hoping for something bright and beautiful next week,
K
Posted by Kristen M. at 12:52 AM