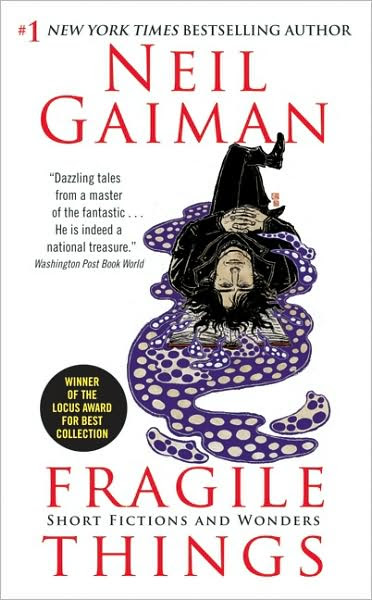 After two months of time spent in the twisted but sometimes glorious imagination of Neil Gaiman, our time together is coming to an end. This was the last week of readings. It will be strange to finally put this book away for a time. I've loved reading it in small doses and I didn't skip any stories like I did the first time I read it. I think I understood so many of them in a different way now that I know Gaiman's writing better. This has actually put me in the mood to re-read Coraline soon! Thank you again to Carl for hosting this read along and keeping us all on task each week.


THE DAY THE SAUCERS CAME

This is probably my favorite piece of the entire collection and I was patiently waiting for its time to come. It is creative and funny and light-hearted in an incredibly nerdy way. Not only all of that, but it reminds me of my teen years, sitting by the phone, oblivious to anything that was happening around me because I was so self-absorbed and I thought the world revolved around boys and friends. I missed out on so much during those years in the world and even in my own family -- but nothing as dramatic as "the saucer day, the zombie day The Ragnarok and fairies day, the day the great winds came ..."

This is one of the few stories that I remembered vividly from my first reading of this book. There are so many ways to look at it -- as an exploration of myth, a study of eternal life and even as a story from father to daughter. The phoenix is always an interesting idea but to pair it with the idea of living eternally through your children--as they pick up in life where you left off--I think it's interesting. It's a much less literal interpretation of the phoenix and that's something that I like about Gaiman's writing. Sometimes he presents things in their most basic form but other times he gives a story or a myth a little twist that takes it somewhere that it has never been before.

And I really enjoyed this story as well! It's just a brief look into the mind of Scheherazade and what she goes through each day, her life dependent on the ability to imagine one more tale or to satisfactorily continue the current one. She's not just a storyteller. She's a sister and a mother and a housekeeper. And yet, only her stories keep her alive. It's sad and hopeful at the same time.

THE MONARCH OF THE GLEN

I can honestly say this collection ended on a high note for me because I breezed through this novella -- enjoying the chance to follow Shadow again through Scotland. Smith was more likable in this story and Mr. Alice, well, let's just say he was tolerable. And it made all the difference in the world (obviously) to have finally read American Gods this year. I might not have even read this story the first time (I couldn't remember it at all which means I probably didn't) but this time I was happy to revisit one of Gaiman's best characters. Now I just need to visit Scotland (and hope that Grendel isn't still hanging around).