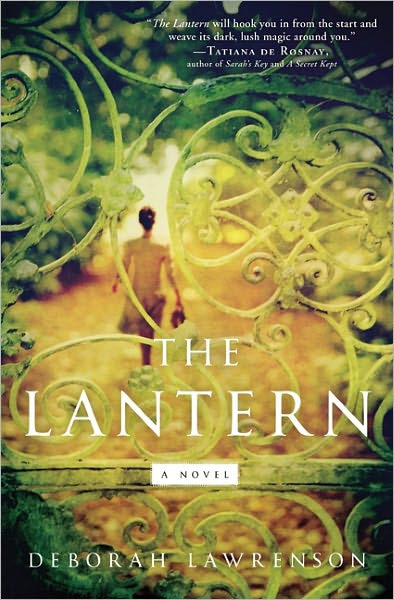 This week we read parts 3 and 4 of Deborah Lawrenson's The Lantern and they were gripping! I had to really force myself not to read the last part immediately. But I wanted to be able to answer the questions for this week properly so I resisted. I also admittedly checked my inbox frequently to be ready when the questions came in so that I could answer them and finish the book! (They came in an hour ago and here I am already.)

So, here are this week's questions from Kailana of The Written World -- as you can guess, these are questions for the middle of the story so they are quite SPOILERY. Please don't read this post if you plan on reading this book!

1. The title of this book is The Lantern, and a lantern makes an appearance in both of the stories. In Benedicte’s past, it had a meaning, but what do you think the lantern signifies in her future and in Eve’s story?


I'm guessing it's the same lantern that was left behind by Andre? If Benedicte was haunted (and her ghost seems to be there now as the lady in the grey dress, right?), then I'm not sure the lantern is linked to Eve but just to the property. After all, it never leads her anywhere -- it just shows up.

2. Carl mentioned scents in last week's questions, but they have been addressed even more in these sections. What significance do you think scents have in this story overall?


I'm still not entirely sure why the scents are included to the degree that they are. It might turn out to all just be for atmosphere. I do think it's interesting though that Marthe's haunting scent is interpreted by Eve as being Rachel's. It's a property with a long history (and even a perfumer that she knows about) so I'm not sure why she doesn't make that connection at all. If she's willing to accept that there is a scented ghost, why wouldn't it be the perfume maker? Why would it be the ex-wife that supposedly died of cancer and never lived in the house? Why would it haunt her when she wouldn't recognize the scent? That would be a stupid ghost. ;)


I haven't thought about this at all while reading. There are a load of current novels that have a past narrative and a present one that are strongly linked by research but this doesn't feel like one of those. We are finding out much more about Marthe than Eve or Rachel ever did and their research is not a real part of the story (except for making Dom upset). If it wasn't for Benedicte, we wouldn't know much about Marthe at all. So I guess I've just kept the stories separate for the most part and have seen them as just coincidentally intersecting. I wonder if in the fifth part they will really collide.

4. Now that things are beginning to move along, what do you think of the characters? Are any standing out for you? Do you particularly like any? Dislike any?


Well, Andre turned out to be a real piece, didn't he? I totally didn't see that coming. I thought he was going to be outed for flirting, not for having a wife and two kids! That was probably the first time I really had to do an about-face on how I felt about a character. The others all seem to be consistent for the most part. I still don't really especially like any of them. Benedicte was the closest but she kind of messed everything up in that whole situation with Pierre and Marthe. Marthe's not bad but I just don't feel a lot for her except sympathy that she basically got ambushed. Eve is driving me up the wall and Dom is still an enigma. And Sabine's "Mrs. Danvers move" was somewhat amusing even though I saw it coming -- getting Eve to research Marthe. Evil! (Don't want to spoil Rebecca for those who haven't read it.)


I thought it was obvious that Pierre killed them while Benedicte was away. The first bones found were a woman in her fifties and then there was a younger woman. It sounds like Marthe and Annette to me especially since we know from Eve's research that Marthe disappeared "at the height of her success" (page 159). Plus the pool was going in when Pierre showed up (although one skeleton was found in the bordering soil, not under the pool). I just don't see how/why Dom could have buried his wife on someone else's property. Why would you bury someone and then buy the property later and forge a tangible link with it? Then again, that sounds just like something that would happen in a novel. :)

6. Do you have any other things you think are significant to talk about? Are there any other predictions to be made for the last two sections of the book?


I have no idea what will happen next! Will we find out about Rachel? I think there's a good chance that she really just died of cancer and is buried in a normal way somewhere and Eve is just exaggerating and sabotaging her relationship. But Dom's a "man who has done a terrible thing" (page 5) -- I'm just not sure if it's emotional or physical. And why wasn't there an obituary when Eve did the web search for Rachel? And, of course, there are the missing local girls ... hmm. Although killing your annoying (possibly cheating) wife is much different than ambushing random young local girls.

Benedicte's story seems to be mostly over except for whatever happens to Pierre (which I hope is especially gruesome). If anything else exceptional happens to her, it will be a real shocker.

7. Lastly, what do you think of this book overall? Other than for the read-along, why are you reading it? Is it meeting your expectations?


This book had already caught my interest before the read-along was announced so this just got me to read the book sooner than I intended. I put it on my library list and then, as I still had 40 names ahead of me, I ended up buying it instead! I guess that worked out well for Harper. ;) I'm really liking this book. I wouldn't say loving it but yes, it's definitely meeting my expectations. I was hoping for a fun, creepy read and it's certainly turning out to be just that. I'll finish the last part in the next hour (only 76 pages) and know for sure!

Off to (hopefully) witness Pierre's untimely death,
K
Posted by Kristen M. at 12:59 AM