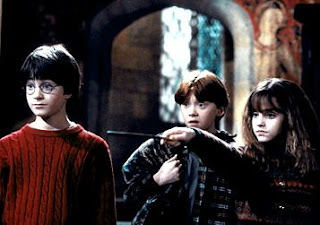 Z and I have started bedtime reading together in earnest again after a few off-and-on episodes and we finished our third book on Wednesday night -- Harry Potter and the Sorcerer's Stone. He had seen the movie a few times but I didn't feel like he ever really paid attention. He certainly wasn't very interested in the story or the characters. But, after our first two reads (book one and two of the Diary of a Wimpy Kid series), I needed something that I would also enjoy reading and that had a good message and a strong story. I asked Z if we could read HP and he said sure.

He was excited about the book every night. We read about half a chapter at a time so we always had a bit of a cliffhanger or something to look forward to because of the chapter title. Every time I mentioned Harry's scar, Z leaned over and traced a lightning bolt on my forehead. When I said "muggle" he smiled and said "muggle, muggle, muggle". Once I had mentioned Nicholas Flamel, he asked me every night when we sat down "who is Nicholas Flamel anyway?" and I had to remind him again that we wouldn't find out until later. When the chapter called "Nicholas Flamel" finally arrived, he was ecstatic! He also thought Neville's toad, Trevor, was a hoot. Although, he won't believe me that Rubeus is Hagrid's first name. Z wants him to just be Hagrid. And Z also insists that Voldemort is a professor -- I think because he was attached to Professor Quirrell. 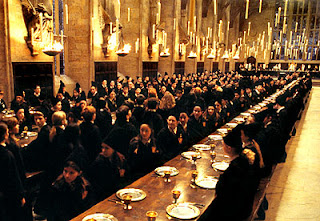 So, now we are sitting together, watching the film together again (along with the necessities, namely popcorn and gummy worms) and he is loving it. He remembers the book quite well and is noticing things that have been changed, like when McGonagall is calling names for the sorting hat. In the film, she calls them first name first. But in the book, they are called last name first. So when she says "Susan Bones", Z is over here saying "Bones, Susan". It's cute! He knows all the characters and even waits for certain things to happen -- like Harry seeing Quirrell in the Leaky Cauldron for the first time.

This was an awesome RIP read for both of us. I was a bit worried about spooky things like Nearly Headless Nick, Voldemort and the Forbidden Forest and scenes like the unicorn hunt and Harry finding out about his parents' death but Z did alright with them. His favorite holiday is Halloween after all! We'll definitely be reading more RIP-eligible books together through October. I pulled out our Halloween picture books but I really think he's craving something more substantial now so I bought a copy of Bunnicula and have some other choices from Eva Ibbotson and others to get us through.