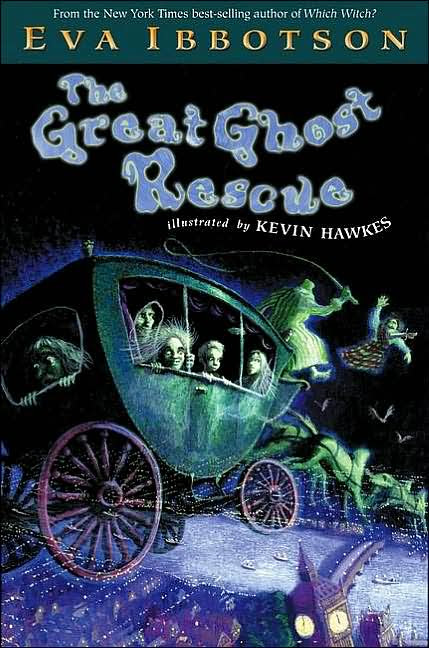 Z and I were reading The Great Ghost Rescue together at bedtime and we ended up finishing a day or two after Halloween. It was our first time reading Eva Ibbotson (and coincidentally, her first book, written in 1975). She was recommended to me because of my love of Diana Wynne Jones and I have to say that I found the same sort of intelligent fantasy that I hoped I would, though for a slightly younger reader.

One thing that I really like about Z is that he's not afraid to explore books from another country. This is a very British book and he had to frequently ask about things like kippers and kilts, Prime Ministers and MPs, and even Henry the Eighth. But, then again, it's quite a universal book about helping those less fortunate than you -- even if "those" happen to be ghosts!

Rick is a young boy at a boarding school who wakes up early one morning to find he is sharing his bed with a ghost. It's Humphrey, the youngest in a family of ghosts that have been driven from their home by developers who have turned it into a vacation resort. There are no longer damp cellars or broken windows or boggy marshes to haunt -- only modern plumbing and a game room. Rick decides that what the ghosts need is a sanctuary and his friend Barbara thinks that the only man who can help is the Prime Minister. So Rick sets off to London, picking up a few others along the way who are also seeking sanctuary. Rick can only hope that he's successful before the British Isles lose all of their fantastic ghosts (and other creepy creatures).

Z and I both loved this story. It was a bit scary and sad at times but that is to be expected in a ghost story. The plot was more complex than I expected with a seemingly pleasant resolution about two-thirds of the the way through the book that, alas, wasn't permanent. The characters were quite amazing too. Z's favorite was Humphrey's older brother, George the Screaming Skull. I rather liked Aunt Hortensia who had been beheaded by Henry VIII and whose head regularly travelled separately from her body.

We can't wait to read our next Ibbotson book together! We actually have a few here to choose from -- Which Witch?, The Secret of Platform 13, Dial-a-Ghost, Island of the Aunts and The Beasts of Clawstone Castle. We will have to savor each one as Ibbotson passed away just a year ago at the age of 85.