New-ish Release: Dandy Gilver and the Proper Treatment of Blood-Stains 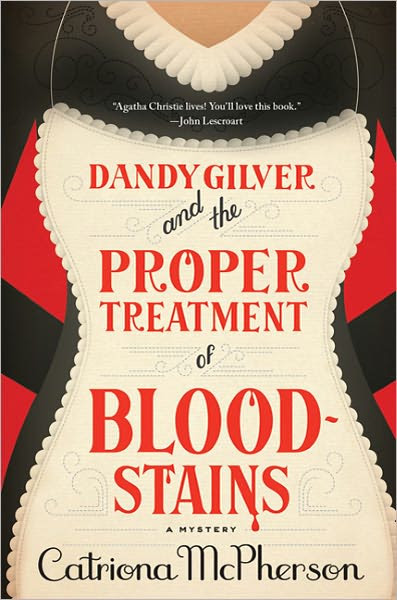 Always on the lookout for a new mystery series to devour, I was excited to hear about Catriona McPherson's Dandy Gilver and the Proper Treatment of Blood-Stains. This isn't the first in the series but rather the fifth and most recent. Though I would have liked to have a bit more background on the life of the cheeky, upper class Dandelion Gilver and her life in Scotland, I fell right in with Dandy and her crime-solving ways.

In this story, Dandy, already an established amateur sleuth, receives a letter from Lollie Balfour, a woman of means who is afraid for her life. She thinks her husband plans to kill her. And this isn't the typical case of hints and suppositions. Lollie's husband has directly stated that he soon will kill her. He recites psychotic poetry and draws his finger across his throat in front of her. And the rest of the household seems to think he's a scoundrel as well, though when Dandy meets him, he seems like an average sort of person. But, Dandy senses that there's more to the story than meets the eye and she decides to take the open lady's maid job and work the case from the inside. And being a convincing maid might just be a harder task than solving the impending murder!

This was a really fun story. Though there are comparisons to Maisie Dobbs in some of the blurbs, I think that Dandy is something of an anti-Maisie. She is married, a mother of grown children and one of the privileged class. She has no formal training in investigation but, rather, she uses her own brains and her best friend, Alec Osborne, as a sounding board. Her methods are not always appropriate but somehow she pulls through each situation with only a few scrapes. The mystery in this book is a bit far-fetched but in a fun way. I will definitely be getting copies of Dandy's previous adventures and will enjoy getting to know her better.

The next book in the series, Dandy Gilver and an Unsuitable Day for Murder, will be released in May.

Sorting the clues from the herrings,
K


Yes, I received a copy of this book for review but my thoughts are honest.
Posted by Kristen M. at 12:47 AM