Scholastic's Parent and Child magazine has released its 100 Greatest Books for Kids (in a beautiful bookshelf format). 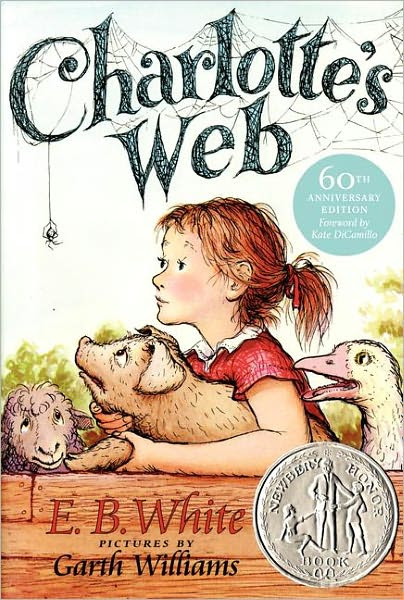 The number one book? Charlotte's Web by E.B. White. Do you agree?

From the Scholastic blog --


In addition to literary merit and popularity, our top 100 includes a variety of genres for different ages, from infants to middle-schoolers. It spans from a Dr. Seuss classic to more recent works such as Diary of a Wimpy Kid, from Anne Frank’s compelling account of the Holocaust to J.K. Rowling’s fantastical tale of Hogwarts. A team of literacy experts and mom bloggers suggested almost 500 titles, which we then narrowed down to 100 and went to work on ranking.

I have to say that there are a couple of books on the list that must be really popular because they have little to absolutely zero literary merit (see The Adventures of Captain Underpants).

Which are our favorites?

#6 Harry Potter and the Sorcerer's Stone
#7 Green Eggs and Ham
#11 Anne of Green Gables
#12 The Very Hungry Caterpillar
#14 The Wind in the Willows
#20 Where the Sidewalk Ends (Z is on a HUGE Shel Silverstein kick right now)
#23 The Phantom Tollbooth
#36 The Secret Garden
#44 Good Night, Gorilla
#47 Brown Bear, Brown Bear, What Do You See?
#53 The House at Pooh Corner
#63 The Invention of Hugo Cabret
#80 What Do You Do With a Tail Like This?

What is missing from this list? Alice in Wonderland, for one! The Monster at the End of This Book is another. Tom's Midnight Garden and The Children of Green Knowe are two more that should be on the list but there don't seem to be many older British authors on it. What do you think is missing from the list?

Wanting to make my own list again,
K
Posted by Kristen M. at 7:05 PM