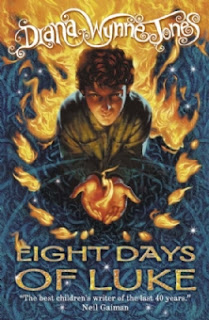 I know you're all going to start questioning my truthfulness when I keep raving about every new Diana Wynne Jones book I read but I'm going to have to risk that. Eight Days of Luke is a fantastic book! With its roots in Norse mythology, this is a story about the gods among us and their occasional need for human assistance. In fact, if you thought American Gods was too dark or too harsh, you might want to try this book instead. Here's what Neil Gaiman had to say about the similarities --


... a few people want to know whether American Gods was inspired by Diana Wynne Jones’s novel “8 Days of Luke”. Not exactly, although they bear an odd relationship, like second cousins once removed or something. About six or seven years ago, I had an idea for a structure for a story, all about the gods and the days of the week. I chewed it and played with it and was terribly happy with it. And then the penny dropped, and I realised, gloomily, that I’d managed, working back from first principles, to come up with a wonderful structure for a story -- but one that Diana had already used, in her brilliant “8 Days of Luke.” So I put it down as one of those places where our heads went to the same sort of place (it happened with the nursery rhyme How Many Miles To Babylon, and in several other times and places) and, with regret, I abandoned it. Or almost. I kept Mr Wednesday, and the day of his meeting, in the back of my head, and when I came to put American Gods together, he was there, ready and waiting.

Eight Days of Luke was published in 1975, the year I was born, but is a remarkably well-preserved story. I didn't feel that any part of it was dated at all. There are arcades and radio programs rather than video games and television but they didn't seem like something that couldn't exist naturally now. And the language seems surprisingly modern. A modern Brit might think differently but I can't speak to that! This is another story where Diana plays with family dynamics, especially dysfunctional ones, and in a very interesting way. David, the main character, is an orphan who is forced to constantly prove his "gratefulness" to his aunt and uncle and cousin who are caring for him. It is a rather revolting situation but also entirely believable. This book is just so well crafted that I enjoyed every minute of reading it. If you can find a copy (it's out of print in the U.S. right now), grab it. I'll be reading it again sooner than later.