DWJ March: The Magicians of Caprona

When I first read The Magicians of Caprona, I said that it wasn't as good as the first two Chrestomanci stories. I take that back. This is a classic Diana Wynne Jones tale and I really enjoyed it on second read. I think my first judgment was because I had just fallen in love with a handsome enchanter and wanted to keep reading about him and, sadly, he only makes a brief appearance in this story. But, being in a different frame of mind this time, I was able to just focus on the story and it was fun! 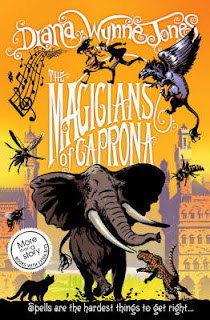 With hints of a Montague/Capulet type-feud and a lot of magic, this is simply an exciting tale. The writing was so vivid that I could picture the entire story clearly in my head. In fact, I think it would make a great Miyazaki-style animated film. It's too bad that he's wrapping up his film career now.

I'm so glad I gave this story a second chance. Of course, it's getting harder now to rank my favorite DWJ stories because it's no longer clear which ones I like least!