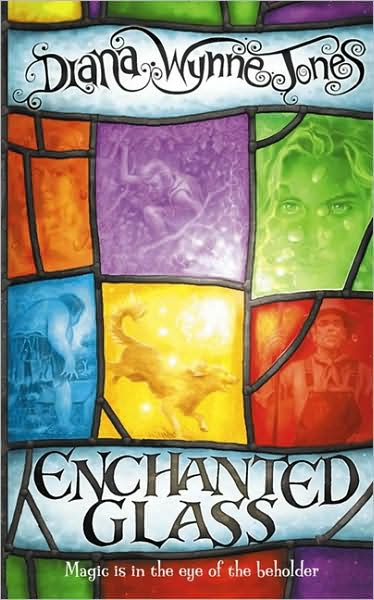 "Professor" Andrew Hope inherits his grandfather's home but doesn't immediately realize (or rather, remember) that with it he also inherits a "field-of-care" -- a magical parcel of land containing his home and the local town. After the arrival of young Aidan, a runaway orphan who is being chased by mysterious and obviously evil beings, Andrew has to recall things he learned as a child and try to figure out how to protect this young boy and all of the citizens of Melstone from the shady Mr. Brown. Luckily, he will be helped by a whole host of characters in and around his house as he solves the mystery of the ancient glass window in his kitchen door and figures out what to do with an abundance of large vegetables.
I am tempted to say "if you only read one Diana Wynne Jones book, make it Enchanted Glass". I have a couple of reasons for this.

Reason One: This is a perfect example of Diana's style and talent. It's low fantasy (magic in a regular sort of world), has a mismatched family unit, incorporates an existing mythology--in this case, the fairy world of Oberon, Titania and Mab--and has a spontaneous romance. It has good pacing with only a bit of a rushed ending.

Reason Two: It's a stand-alone novel so you don't have to commit to a series.

Reason Three: It's fun and exciting and I love it. Plus, the UK cover (shown above) is really, really pretty.

I read and adored this book when it came out in June 2010. If you haven't had the chance to read it yet, don't wait any longer. You have nine more days of Diana Wynne Jones month left!

Summoning all my powers of persuasion,
K
Posted by Kristen M. at 10:18 AM