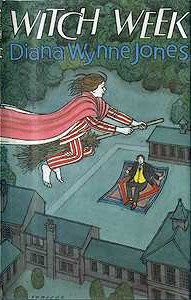 The fourth tale in the Chrestomanci series, Witch Week is another reread for me that I just finished late last night. I liked it better than on first read but there are so many unlikable children and adults in it (almost all of them, in fact) that it's hard for me to say I loved it. I wouldn't want to spend much more time with any of these characters than I already had to! Chrestomanci is quite fabulous in it though -- better than in Magicians of Caprona. It makes me want to pick up Conrad's Fate, The Pinhoe Egg and Mixed Magics immediately.

This story is set in a world almost identical to ours except for one thing -- magic. The world is full of it and yet it is illegal and witches are burnt in bonfires, as they have been for over 400 years. Some of the students of 6B at Larwood House are witch orphans and so they are especially suspect. When a note slipped between exercise books insists that there is, in fact, a witch in 6B, students start accusing not only each other but also suspect their own selves of being witches. Unfortunately, the inquisitor is on his way and whoever gets caught out is going to get burned.

Coincidentally, BBC Radio 4 Extra broadcast a radio play version of this story earlier this week. It's available to listen to worldwide for four more days so I wanted to share the link with you before it's too late. I'm listening as I write this and it's pretty good. The voices are a bit too pleasant for such unpleasant children but the plot is fairly intact. (Update: Chrestomanci's voice and character is ALL sorts of wrong. Just so you know before you listen. He doesn't sound suave or wonderful.) If you want a taste of Diana Wynne Jones, have a listen -- it's only 60 minutes long. It is a bit confusing that I just finished reading about class 6B though and in the radio play it's 2Y. But Wikipedia explains it like this --


It is interesting to note that, in almost every version of the book published, the class the story focuses on has a different name, according to the age group the publishers were aiming the book at the time. For instance:


If you're a fan of boarding school stories, you might want to try this one. I don't know if anyone has seen the show House of Anubis (on Nickelodeon in the US) but the radio play is reminding me a lot of that show -- a bit overdramatic and full of saucy British kids but still fun.

Enjoying a multimedia experience,
K
Posted by Kristen M. at 11:02 AM