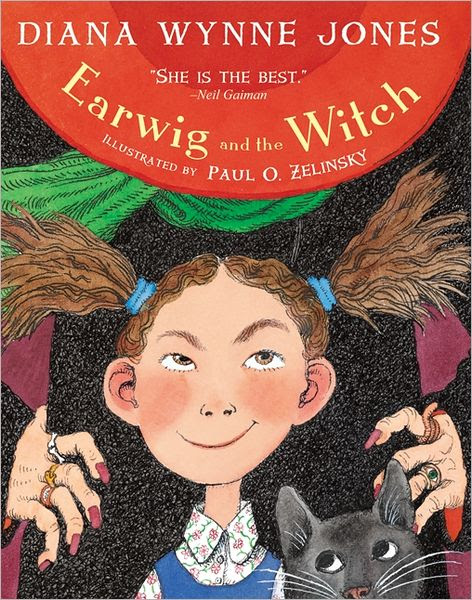 Earwig and the Witch is Diana Wynne Jones' last published book, released here in the US only a month ago. It's the story of Earwig, an orphan girl with a special power -- the power of persuasion. She always gets her way and is quite precocious because of it. But one day, a strange woman and man-looking-thing come and, despite her best (or worst) efforts, adopt her and she suddenly finds herself as a servant to a witch! With the help of Thomas, the witch's familiar, can Earwig learn magic and change her oppressive situation?

I was very surprised when I finally saw Earwig and the Witch on the bookstore shelf because it's such a short little story. It's possibly Diana Wynne Jones' youngest audience book and it's only 117 highly-illustrated pages long. I think it would certainly be appropriate for 7 or 8 year olds -- which I wouldn't say about many of her books! In fact, I think Z will love it and I hope to read it with him later this month.

I'm not sure if Diana meant for this to become a series, but it seems as if she did because there are a lot of hints and loose ends and mysterious revelations that aren't resolved. Still, this is a charming story and, for all of its brevity, Diana's writing really shines through. All of the characters practically come off the page. This is certainly helped by the illustrations from Caldecott winner Paul O. Zelinsky. They are all fun and perfectly placed. His drawings of the witch's workroom are especially disgusting and amusing! 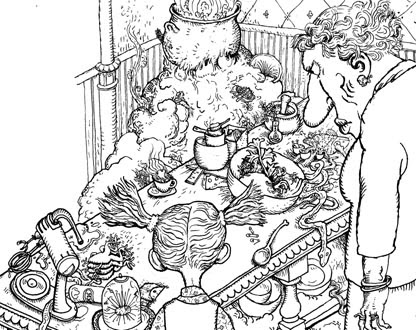 And yet, I think I will also buy a copy of the UK version illustrated by Marion Lindsay (shown below) as it's in a completely different, but cute, style. I just can't resist the cute little spiders on the cover!

Hopefully persuading you to go buy this book,
K
Posted by Kristen M. at 12:37 AM