New Release: Dandy Gilver and an Unsuitable Day for a Murder 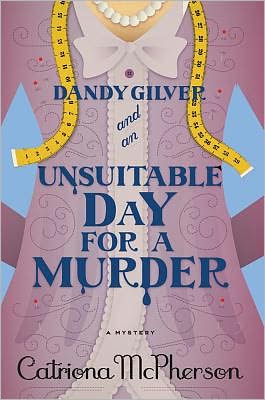 In January, I read the first in Catriona McPherson's Dandy Gilver series (again, I believe that it wasn't actually the first she wrote in the series but rather the first published by Minotaur Books) and now the second book has been released -- Dandy Gilver and an Unsuitable Day for a Murder.

Taking place in the Scottish town of Dunfermline, Dandy is called in when a teenaged girl goes missing. But the woman who summoned her, grandmother of the young lady, seems irritated when Dandy shows up and curtly explains that she was expecting her the next day. Dandy can't understand why someone would postpone looking for a missing person, but that's just the first strange thing in a story of warring department stores, family secrets and murder.

Though this story differed quite a bit from the first--where Dandy had to pose as a lady's maid--this still wasn't your typical detective story because, in this case, Dandy ends up working simply to find out the truth rather than working for a specific client. This shows a lot about her personality and her morals and I enjoyed that aspect of it. The story did take a ridiculous number of twists and turns that actually took some effort for me to follow but, once I had it all figured out, it was worth it.