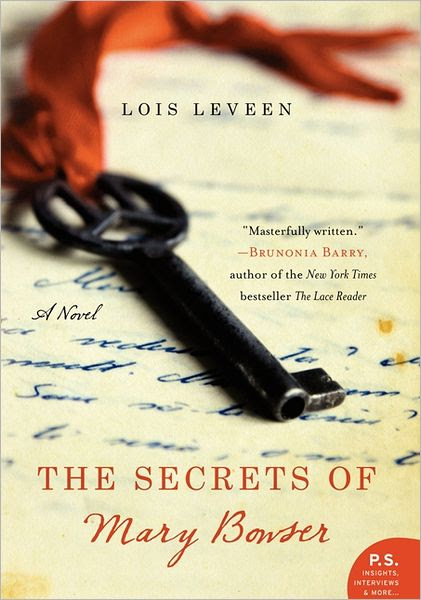 Destined to be on many "best of the year" lists, Lois Leveen has truly brought history to life in The Secrets of Mary Bowser. Starting from the briefest of mentions of this remarkable woman in historical records, Leveen deftly fleshes out the story of Mary Bowser, a freed slave who was educated in Philadelphia and who returned to Virginia to become a spy for the Union during the Civil War. Exploring such weighty topics as slavery, abolitionism, religion and war, this is also a story about family, friendship and the spaces in between.

I know many of you may already have started seeing positive reviews about this novel and some of you might even have review copies. I strongly urge you not to put off reading this one. It does not read like a first novel at all thanks to Leveen's smooth prose and tight story. The story is, in fact, so believable that the reader must constantly remind herself that much of it is only supposition. But if Mary Bowser was even half the woman that she is made out to be, then she deserves to have her story told.

I also had the opportunity to meet Lois at Third Place Books on Tuesday night and hear her read from the book. I even asked a couple of questions, something I rarely do. It was an enlightening evening and led me to an even greater appreciation of the novel. If you happen to be in Birmingham, Alabama, you can go to one of her events tonight!