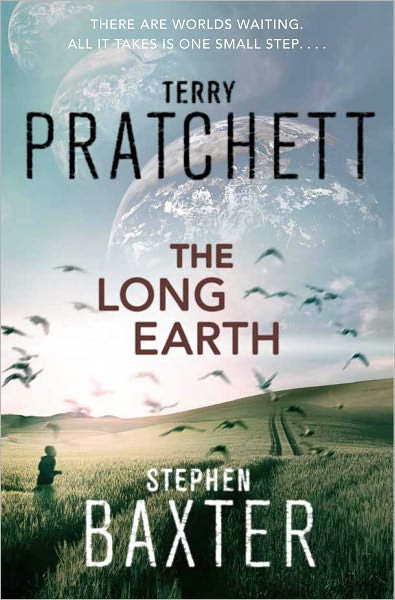 Tomorrow you will all have the chance to embark on a unique adventure with Terry Pratchett and Stephen Baxter through The Long Earth. This science fiction tale is fresh and exciting and frightening and thought-provoking. There's travel to alternate universes, a giant airship, a Tibetan soul that has been reincarnated into a vending machine and much more. With an exploration of humanity's role on Earth, this is a fascinating "what if" of a novel. The only problem with this book was that it ended, and somewhat abruptly at that.

Actually, I was also a bit disappointed that some characters were not fleshed out as much as others. Some we met only briefly and some we could have explored from other perspectives but didn't. I'm not sure if there should have been more focus on less individuals or, as I would have preferred, simply a longer novel. (It appears, after a bit of searching, that it's actually going to be a two-book series.)

As is, I'm definitely in the mood for some additional (and lighter) Pratchett fare and I've decided to get back to my Discworld reading this summer. I already have two titles on hold at the library (Reaper Man and Equal Rites, for those who are curious).

Other thoughts and reviews: Vasilly, Paula (not many posts out there yet!)
Wishing that possibility was actuality,
K
Posted by Kristen M. at 12:12 AM