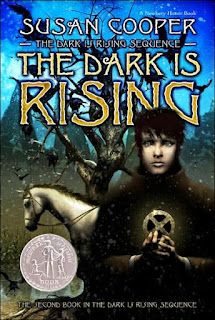 Today is the Top 100 Chapter Books discussion for The Dark is Rising by Susan Cooper over at The Estella Society so head on over there if you have read this book or any of the series. I would love to hear your thoughts on it!

Without any reservations, I thought this book (and the one before it in the series, Under Sea, Over Stone) were awesome. They're exciting adventures with real heft, history and consequence. So, I also decided to watch the recent film version of this, The Seeker: The Dark is Rising (2007), even though it had terrible reviews and fans of the book universally despised it.

I have to say, that as a film on its own, it wasn't awful. It was your standard Hollywood kid adventure film with a bit of goofiness (kind of like the recent Disney Jules Verne-based films) where the kid hero's hormones usually get the best of him. But as an interpretation of the book, it was absolutely dreadful. One critical blog post was called The Dark is Sinking. Here is a bit from it --


During filming in Bucharest, Romania there was a joke on The Dark is Rising set that only three things have been changed from the original 1973 novel: the nationality of lead character Will Stanton, changed from English to American; his age changed from 11 to 13; and everything else that happens in the story. A solo quest by an 11-year-old is no longer solo; family values have been deemed out of date — the happy, loving Stanton family rewritten dysfunctional; a series of five books bereft of a single love interest has been re-imagined with the lead character chasing the fairer sex, pleading in the trailer “I can't save the world! I don't even know how to talk to a girl!” Angered, disgusted fans are reporting little interest in their hero’s new, most ordinary of plights.

The title of the article in The Guardian was The Dark is Rising, so avoid it if you can where they complain about the removal of most of the pagan lore with no added explanation of why any of these mysterious things would then be happening in the world. And Susan Cooper's own interview with NPR (Author 'Uncertain' About 'Dark' Leap to Big Screen) is quite depressing when she attempts to defend Will's age and circumstances from the book against the screenwriter's complaints.

After watching the film, I have to completely agree with critics and book fans alike. Even from the very first moments of this film, you know it is not what it should/could have been. With cheesy effects, a total miscasting of most of the characters (except for Chris Eccleston as the super baddie who is creepy and intimidating but still, sadly, out of place) and a complete change of Will's temperament, this film lost the soul of Cooper's story. It also didn't make much sense to still have a villain on horseback when the setting was brought forward to modern times. And it was a WHITE horse! How can the villain be on a white horse? Not to mention that by stripping out the pagan signs and lore and turning Will into a savior completely undermined the point of the story. The fight between Light and Dark on earth is older than Christianity. That was one of Cooper's main themes.

Verdict: Blech. There's nothing really wrong with the film as a film so I don't want to say avoid it but the book is SO much better. It has meaning and integrity and depth. The film has none of those things. Eh, I'm going to say it. Read the book, avoid the film.

Depressed by Hollywood's lack of soul,
K
Posted by Kristen M. at 12:08 AM