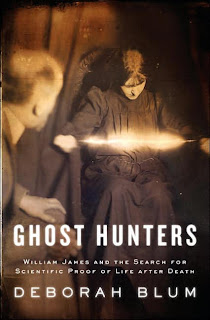 I snuck one non-fiction book in this RIP season and it was a great one. The Poisoner's Handbook was my final RIP read last year (and an absolutely fantastic read) so it's only fitting that Deborah Blum got that coveted spot again this year with Ghost Hunters: William James and the Search for Scientific Proof of Life After Death. I didn't love this one as much as Poisoner but I still thought it was a very solid and fascinating study of spiritualism in the late 19th century and the attempt by scientists and philosophers to investigate its practitioners. Because I read so many novels that feature spiritualism (especially ones that are set in Victorian times), this was a perfect companion to those books. As for my own personal views on the subject, like Blum I am a scientist and a skeptic but, when confronted with quality evidence, I can't help but wonder if there's some truth there, some unexplained force in the ether. I'm like 90 percent Scully, 10 percent Mulder. The truth is out there but it seems somewhat unlikely that enough evidence will ever be collected to prove anything conclusively.

How about you? Do you believe in spirits or ghosts, telepathy or telekinesis?