RIP VII Read #3: Charlotte Markham and the House of Darkling 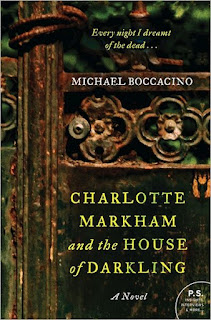 When I gave away a copy of Charlotte Markham and the House of Darkling by Michael Boccacino during BBAW, I promised to come back and gush about it later. Then, of course, life happened and now it's been a month since I finished the book. Usually, that's bad news because my detail retention doesn't last very long after I set down a book. However, this story was so memorable that it's almost all still with me now (minus a few names that I can easily look up) which proves that my praise for this book was probably well deserved.

Charlotte Markham is the name of the governess to Paul and James Darrow. She is also a widow, working for a widower in a home where death is no stranger. Still, nothing can prepare Charlotte or the Darrows for what lies in wait for them past the mysterious mist in the forest. And the choices they make once they find themselves in the House of Darkling have the ability to destroy the entire world as we know it.

As is probably obvious, "the world as we know it" in this novel isn't really the world as we know it at all. For us, the veil between life and death is a solid wall and there is no coming back. But Boccacino, inspired by his mother's words and thoughts as her health declined due to cancer, imagines that it is a much less tenuous barrier that can be pierced by mother love. With a heavy dose of the supernatural and some horrific happenings, he brings this dark Victorian tale to life in such a way that may make readers worry that some part of the story could in fact be real. Charlotte is a formidable heroine whose intelligence and moral strength keeps her interesting and the things experienced by Mr. Darrow and the boys seem only too real, especially as I watch family members also dealing with the loss of a young parent.

I can't recommend this book enough. I noticed that the only low ratings reviews of it on LibraryThing so far are from readers who don't seem to be fans of supernatural, gothic Victoriana. If you are however, like me, able to stretch your imagination to embrace another bizarre existence beyond our own, you'll likely be a fan of this book.