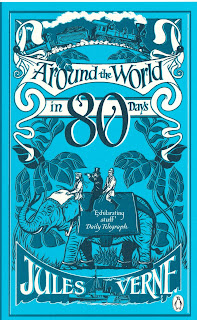 In preparation for a non-fiction read (that I'll be featuring tomorrow), I finally picked up Jules Verne's classic Around the World in Eighty Days. It was much shorter that I expected and much less boring than my last Verne read. Good news all around (bad pun intended)!

The title of this book pretty much explains the plot -- Phileas Fogg, a remarkably stable gentleman of unknown means, overhears a discussion about global circumnavigation and the conversation ends in a wager that Phileas cannot complete the trip in eighty days. He, however, is absolutely certain he will be successful. In fact, he prepares to set out that same day with his new manservant, Passepartout. Heading east, he sets out on a race against time and the suspicion that he is actually a bank robber on the run.

While there are obviously going to be uncomfortable racial characterizations in any Victorian stories that involve world cultures, I found those in Eighty Days to be relatively mild, not enough to distract from a fun story. I can see why this tale captured the imaginations of so many, even inspiring an around the world race (which I will tell you about tomorrow). This has even made me excited to read more Verne, something I haven't felt in a long time. Don't be surprised if you see Journey to the Center of the Earth here within the next few months.