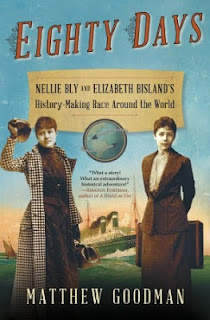 Though the name is something of a misnomer as one of the "racers" didn't even know she had a competitor until halfway through the journey, Eighty Days: Nellie Bly and Elizabeth Bisland's History-Making Race Around the World by Matthew Goodman is still an exciting adventure that highlights the unique adventures of two brave twenty-somethings in 1889.

Nellie Bly was looking to make her name in journalism, to break free of the limits put on women at the time who were only allowed to write society columns and local interest pieces. Once she finally got into a position where she was being given real, hard-hitting investigative assignments, she got the idea to attempt to beat Phileas Fogg's fictional record for traveling around the world in eighty days. She was rejected the first time she put forth the suggestion but eventually her paper, looking for an attention grabber, took her up on the idea and sent her east to travel around the world. Not to be outdone after they heard of Bly's departure, Elizabeth Bisland's paper asked her, a literary critic, to head off on a similar journey but departing to the west. Thus began a "race" between two women who were trailblazers in the fight for women's equality despite their different directions.

Though the scope of this book might have been just a tad too broad, it was nevertheless a fascinating read. I truly felt I got to know these two women as they each traveled alone around the world. My opinions of each of them changed throughout the journey. With one woman quiet and reserved and the other brash and attention-seeking, it was interesting to see how each one dealt with the challenges that came their way. They also had different views of the cultures and lands that they encountered along the journeys, some more noble and accepting than others. And, as both women were American, it was interesting to see how their nationality affected their views on the world. I'm also very glad that I read Jules Verne's classic tale before reading this book as they paired well together.

Feeling inspired and motivated,
K
Posted by Kristen M. at 12:05 AM