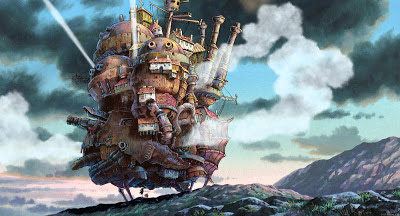 Diana Wynne Jones is one of the authors I foist on everyone who asks for a fantasy reading recommendation. Because I didn’t discover her work until I was well into my twenties (thanks to the Miyazaki film version of HOWL’S MOVING CASTLE), I try to make up for lost time and spread the word of an author whose works deserve to be widely read.

My relationship with HOWL’S MOVING CASTLE is a bit backwards. Usually, I seek out the book before watching the movie, but I didn’t in this case. Howl, a tortured wizard with a penchant for snazzy dressing and a weakness for hair dye, was the perfect animated hero. Sophie was also a nuanced heroine with a tinge of sadness so common in Miyazaki films, and Calcifer just cracked me up. I ended up loving the film and I knew I had to read the book.

So I bought a trade paperback copy and settled down to read. A week later, I emerged from my Howl-induced stupor, and I was hooked. Addicted, really. Not just to Howl, but to Jones’s work, and I knew I had to read everything that she had written. So I stocked up my Metrocard, threw on my coat, and returned to the bookstore.

To my dismay, they didn't carry many of her books, and the few that were in print needed to be ordered online (or imported from England). Still, I tracked them down one by one (I'm still not done with my quest, by the way, having yet to read THE OGRE DOWNSTAIRS or HEXWOOD, which I hear are wonderful). But the ones I did find, I hoarded like a hungry dragon. I'd have to stop myself from devouring those books in one sitting. Instead, I would linger over the pages as though seated at a literary feast, chewing on odd turns of phrase or drinking in a particularly apt description.

Still, I’m not that greedy, and I know a good book when I read one, which is why I almost always recommend Jones’s books to readers looking for some unusual fantasy. And the feedback is always spectacular. Even my best friend has gotten hooked on Jones. (We also fight over Howl, whom we both claim as our literary boyfriend, but that's neither here nor there.)

So what makes Jones and her books so great? Here are a few reasons I’ve come up with as I’ve mulled over her work.
So there you have it: the magic and literary mystery of Diana Wynne Jones. Why do you read her books, and what are some of your favorites? Leave a comment below, or Tweet me @sabrinaslibrary.

Sabrina is a marketing maven by day and fantasy writer by night. When she isn’t buried in a new story, she’s blogging about books and writing at Sabrina’s Library, or Tweeting about all things literary (and often silly) at @sabrinaslibrary.
Posted by Kristen M. at 12:05 AM