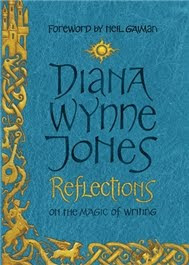 First, I would like to say congratulations to Nina (a.k.a. Topcho) from Bulgaria who has won the bronze Howl and Sophie necklace. She was one of the participants in the first viewing of Howl's Moving Castle so I know she's a true fan of Diana's most famous couple! If you're interested in buying a necklace for yourself, just visit Authored Adornments on Etsy.

Also, Cat Gerlach is having a contest on her website to win e-book and print copies of one of her stories, inspired by Diana's work. Click over there to enter!

I'm still not quite half of the way through Reflections. It's taking a long time to read because I am rereading so many parts of it and sometimes marking multiple passages on a page. I feel like I'm really getting to know Diana through her words, whether they be scholarly or for an audience of children and I'm learning so many useful things.

What I want to talk about this week is censorship, but not the kind you might think of. What I'm concerned about is parental censorship. When Diana was a girl, her parents wouldn't let her or her sisters read books that they didn't approve of, that is anything but realistic fiction or classical myths.


"When my mother was a small girl, around 1908-9, she was addicted to fairy stories--any story that began 'Once upon a time' and went on to talk about princes and princesses and magic. These, in those days, were so much despised that you could almost only get them as little booklets printed on cheap paper and sold for two coppers at the slush end of the news agent's. But she saved up her pennies and she bought one booklet a month--and read and reread them avidly. Until the day her father caught her reading them. He was furious. He punished her. Then he took all the booklets away and burned them. He said they were not about real facts and so they would destroy her mind, and he forbade her ever to read such things again. And she obeyed him. He died soon after, which kind of fixed it for her.
I never met my grandfather--for which I am rather glad. I don't think we'd have got on."

"The third reason [why Diana and her sisters had barely any books] was censorship by my mother. She had been trained as a child to believe that fantasy was bad for you and that you should only read a book if it was literature."

" ... I learned [fantasy's] value from not having it, or at least not having it in books very much. There were glimmerings, just enough to set up a craving of the kind you have when you are seriously deficient in some vitamin and, oddly enough, nothing I wrote in those exercise books was fantasy. I did not think it was allowed. Fantasy was 'sentimental nonsense.'"

Sometimes I find myself steering Z away from certain books (Captain Underpants and its like, usually) having what I think are perfectly valid reasons for not letting him read those books. But now I'm starting to wonder if I'm keeping him from experiencing something important. Am I not allowing him to explore certain topics or types of humor that would actually have an impact on the growth of his imagination? Am I making those books more attractive by banning them? And am I simply stifling his own path of discovery by putting up roadblocks, by forcing my own ideas of good and bad children's literature on him? Am I denying him the chance to choose for himself? Though my mom censored which films I was allowed to watch and at what age, I can't recall her ever keeping books from me. I chose my own books at the library and checked them out without running them past her first. It made me feel empowered and in control. I always felt that I was reading exactly what I wanted to be reading. So, I'm going to try and let go a bit -- to stop passing judgment on some of the books that Z chooses to read. This doesn't mean that I won't gently offer "better" literature to him and that I won't choose books for our read-togethers that I think he should be exposed to but I will also allow him a space to explore, a place where his imagination can expand and adjust.

Learning to be a better guardian,
K
Posted by Kristen M. at 12:14 AM