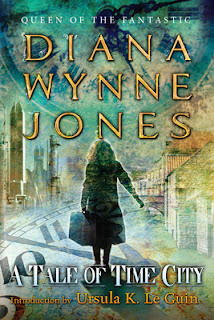 Welcome to the A Tale of Time City discussion! I hope that a few of you got a chance to read/reread this one because it's got a complex and exciting plot with a wide variety of characters and ideas. It was my second time reading the book and, as expected, I understood and enjoyed it more this time through.

I want to make this more of an open discussion. So, tell me, did you enjoy this story? What did you think of the relationships between Jonathan, Sam and Vivian? Were you able to follow the Time City plot? Would you ever want to be a time observer? 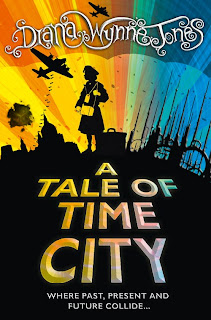 The first time I read the story, I felt a little bit lost by the end. I understood the basics but not necessarily the mechanics. This time, I had no problem following it and I appreciated the intricacies of the plot more since I wasn't struggling to keep up. I also was able to pay attention more to the details of the technology and environment that Diana created -- chairs and beds with no real surfaces, high tech belts and more -- and I really enjoyed it all. There were some things I liked less, though, and those were the instances of vengeance/punishment, or lack thereof. Anastasia recently mentioned in her post about The Game that she was annoyed that kids escape punishment a lot in DWJ's stories. I found that to be the case for one character in this story, Sam, but the opposite for another child, Vivian Lee. Sam was let off the hook with only a forced-feeding when he stole a large amount of money from a friend. He never even expressed remorse and by the end, he didn't seem to be affected by it at all, as he was already asking for more butter-pies. Vivian, on the other hand, was sent into history all alone because she was a "baddie", quite a terrible fate in the scheme of things to be a child, all alone in a strange place. Is there any action that a child of eleven/twelve can't be redeemed from? It seems harsh and unfair.

But speaking of butter-pies, there's a butter-pie recipe out there that someone created. It seems extremely labor intensive and prone to melty accidents and I'm not entirely sure of how it would hold together. Still, the chance to taste a butter-pie might be worth it! Does anyone have the kitchen skills to make these (and can I come visit)?

Finding time for good books and tasty treats,
K
Posted by Kristen M. at 12:04 AM