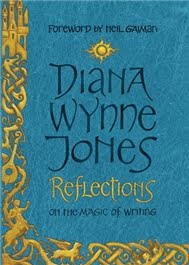 What really stood out in this week's reading for me were Diana's pieces on Tolkien and The Lord of the Rings series and C.S. Lewis and the Narnia books. It's amazing that she was able to take classes from both of these geniuses while she was at Oxford. The Tolkien piece is more extensive and would be of most interest to those who have read the series. The C.S. Lewis one is more of a brief reflection on the man and his stories. In both, we get her opinions about the men and about their stories. It's always fascinating to see what an author loves, appreciates or even hates in another's stories.

If you could take a literature course from any living author, who would it be?

Obviously Neil Gaiman would be a good choice. He's wonderful at crafting a variety of tales, all of which are unique in tone and style. He's also a very clear communicator. It sounds as if the opposite was true of Tolkien but Diana stayed in his class anyway to catch those fleeting glimpses of his genius that he didn't mutter into the chalkboard. Carlos Ruiz Zafón is another one that I would love to learn from. He's also a very entertaining speaker (as it seems C.S. Lewis was) and has a flair for setting and long, complex story lines. I'm sure the longer I think, the more authors I could add to this list. I'll stop now and get back to Reflections instead where I can learn from Diana herself.

Contemplating the perfect literary education,
K
Posted by Kristen M. at 12:33 AM