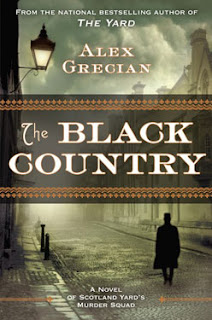 It was only last September when I read Alex Grecian's first novel of the Scotland Yard Murder Squad, The Yard. The inaugural tale of Inspector Walter Day and policeman Nevil Hammersmith, solving crime in the shadow of the Ripper killings, was incredibly dark and brutal but thoroughly compelling and I was looking forward to continuing with the fledgling series. And today The Black Country, second in the series, is out. I had a moment of cold feet before starting it, worried that the queasiness I felt during the first book was going to surface again but I shouldn't have worried. Though there was still a bleak setting and a shocking crime (or two ... or three), the main characters were even more well developed and the story just as compelling.

Set in the industrial region known as the Black Country (thus called because of the soot in the air), Day and Hammersmith travel to investigate a missing persons case -- that of a father, mother and son who have mysteriously disappeared, leaving behind three more young children. Many things stand in the way of the investigation including an insular mining community and the superstitions of the townspeople. And when the ground under their feet literally starts giving way, this might be one case that they can't solve.

This is quickly becoming one of my favorite series. The characters, including the pathologist Dr. Kingsley and his assistant Henry, are complex and anything but the stereotypical Victorian crime solvers. The Black Country setting was very well incorporated, the dismal atmosphere almost tangible. And I'm happy that Grecian took his detective out of London so soon. It allowed for the characters to develop out of their element, their homes and their standard relationships. This means that there will be no expectations for the third book other than a strong story about these flawed but noble men doing a job that they are each uniquely qualified for.