Catching Up: Sci-Fi, Humor and Fun

I wanted to get my reviews/mentions caught up before RIP season starts so I'm going to start with a couple today that I read during the Dog Days Readathon (for which I failed to do a wrap-up post because I had to get ready for my mother-in-law's visit ... yay). 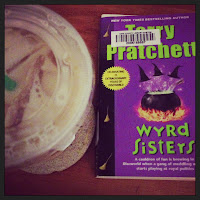 First up was Wyrd Sisters by Terry Pratchett. I had stalled in my Discworld reading but I was excited to get going again and this was the perfect book to do it with. Granny Weatherwax is one of my favorite characters and she, Nanny Ogg and poor, young Magrat have a fun dynamic. I liked the brief foray into Ankh-Morpork and the whole Hamlet tie-in. This is definitely a book that stands completely on its own. 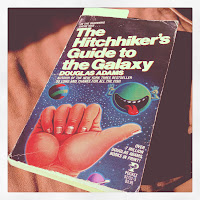 Then I did a reread of Douglas Adams' The Hitchhiker's Guide to the Galaxy. This was a many times over reread but I have watched the recent film so many times since the last time I read it that I ended up somewhat surprised about what is and isn't actually in the book. It turned out to be so much more simple and fun of a story than I remembered. I definitely want to read the other book in the series in the near future. 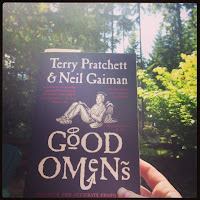 I finished up the weekend (and went into the week after) with Good Omens: The Nice and Accurate Prophecies of Agnes Nutter, Witch by Terry Pratchett and Neil Gaiman. I was totally in the mood to read it after seeing Neil recently and I was due for a reread anyway. It was only my second time with it and, while I remember it being funnier than it was this time through, I also didn't remember quite the level of sharpness and wit that was in it. Also, the last time I read it, I hadn't read any Pratchett and not much Gaiman so it was a different experience to be more familiar with their styles and language choices. Bottom line, it was still a fantastic read the second time through and I can't wait to see the (possible) upcoming tv production.

Finally, I'm in the middle of Witches Abroad, also by Terry Pratchett because I just couldn't stop! It's a bit of a slower book than other Discworld novels I've read so far but it's a fairy tale and fantasy lover's dream. So far I've caught references to The Hobbit, The Lord of the Rings and multiple fairy tales (Little Red Riding Hood, Sleeping Beauty and vampire lore to start). It's amusing and I can't wait to finish it this week in preparation for RIP.

Having laughs and learns,
K
Posted by Kristen M. at 12:25 AM