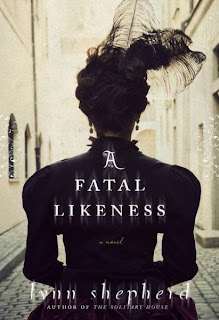 I was very excited to receive an ARC of A Fatal Likeness by Lynn Shepherd this summer and I read it almost immediately and then forgot to note the release date. I just looked today and, well, it came out last week! So now I get to tell you about this second book of Charles Maddox, young detective (the first being The Solitary House). This time, Charles is contacted by the son and daughter-in-law of Mary Shelley, told that he is being hired to investigate the veracity of papers that could be used to dim the brilliant legacy of Percy Bysshe Shelley. The story journeys through time and space to review some of the relationships between the Shelleys, their families and friends and to cast a light on some of their more questionable actions.

I will admit that I only know the bare minimum about the Shelleys and Byron, mostly from works of fiction or as side-notes in non-fiction about other subjects. I have heard that some readers are taking issue, accusing Shepherd of taking liberties with the history and painting the Shelleys with a darker brush than history warrants. However, I didn't feel that they were made into villains so much as being shown as victims of their own eccentricities and maladies. If that was exaggerated at any point to make them seem criminal, I still understood that it was in a fictional context and didn't take offense.

Of course this book has its own protagonist, though I found Maddox's role in this story to actually be somewhat minimal. Still, I saw character growth and I am very interested to see where his character is headed if Shepherd continues writing about him (which I kind of think she has to from where she left his personal story). The bottom line is that I enjoyed the first Maddox novel more but I thought this one was interesting and just as strong in research and construction as the first. But I do like Shepherd's foray into fiction (Dickens and Collins) better because there wasn't so much questioning of whether she had accurately represented her historical figures and done right by them.

Avoiding those both treacherous and fatal,
K
Posted by Kristen M. at 12:17 AM