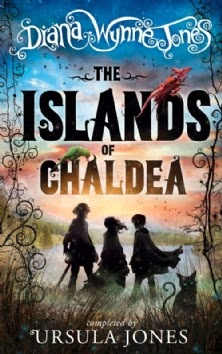 The Islands of Chaldea. Le sigh. Is this really Diana's last novel or do we think/hope/pray that there is a secret treasure trove of three-quarter finished stories somewhere that just need to be polished and released? We can dream, right?

The US release of this book is April 22 so, of course, many readers don't have this book in their hands yet. I don't want anyone's experience of this book ruined so here's fair warning. Everything below the next book cover, including comments, could have spoilers.

For those who want to know my basic impressions without giving anything away, I'll say this -- I devoured it in about a day and a half and I can honestly say that it's quite good on first read and it's definitely DWJ. Ursula's completion is totally acceptable and I couldn't tell where Diana left off and Ursula picked up in the story. It's one of Diana's younger books (middle grade) which was a little strange but also a somewhat fitting place to come back to at the end of her career/life. It has so many recognizable elements in it that it just felt right and I know that most of you are going to really enjoy it. And have your tissues ready before you read the Afterword because it will break your heart all over again that the world lost Diana far, far too early. This is the quote from the back of the UK version --


Getting to read an extra Diana Wynne Jones novel, almost finished at the time of her death, is like being given extra time with her: the wisdom, the humour and the storytelling magic were hers until the end... I am only grateful that she took us on this final journey. -- Neil Gaiman 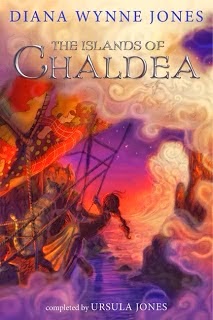 Now, for those who have read the book --

What did you think of the pacing of the story?
I thought it was a bit slow at the start and a bit fast at the end but just right through the middle. The length of the book was good for the story. Any longer and it would have been too much journey for such small islands.

We don't get non-humanoid characters in many of DWJ's stories so what did you think about having so many in this one (Green Greet, Plug-Ugly, etc.)?
I think this was part of what gave this story a younger feel for me but I liked the way that the creatures were revealed through the story to have more and more power. When they were eventually identified as being the guardians, I was really happy that they were going to be revered and respected. I also liked that Aileen remained friends with the cat but it didn't remain her pet after its aim was achieved. I wonder if the same thing happened with the bird and the dragon. The bird seems to have always had an "owner" though.

How about the various romances in the story -- were there any that you did or didn't like?
I have to admit that the Aileen/Ogo romance was a bit hard to accept. At the beginning she calls him ugly and despised and doesn't act like he has any partner potential at all. Of course, I'm really happy that she didn't end up with Ivar. That guy was a tool! The romance between Aunt Beck and Prince Alasdair was totally unexpected but it made me smile, especially after it made a real physical change in her. Finally, we have a weirdly cranky adult with an explanation. I bet Ursula wrote that part though. Diana would have probably just left her cranky.

Did you think of any other DWJ stories while you were reading this one?
I thought a lot about the Magid stories. It might be because I just read them but the way the magic worked and the types of characters (evil mom!) seemed familiar. I wouldn't be surprised if this world was on the loop, way over on the magic side. Rebalancing magic after an evil working is definitely a Magid theme.

What else stood out to you from this story? Are you glad that it was released, even though it was finished by someone else? Do you think that Ursula got it right?
Posted by Kristen M. at 12:12 AM