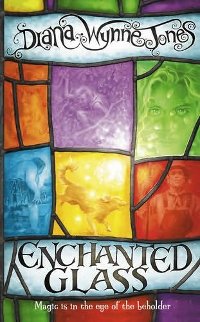 I hope that a few of you found the time to read Enchanted Glass. This is one of my favorite DWJ books. It's for a bit younger of a reader than some of her other books but I think it's a good entry book for those who haven't given her a try yet. It's got quite a few of her trademark elements (magic, mythology, unconventional families) and it brings everything together in a strong stand-alone story. 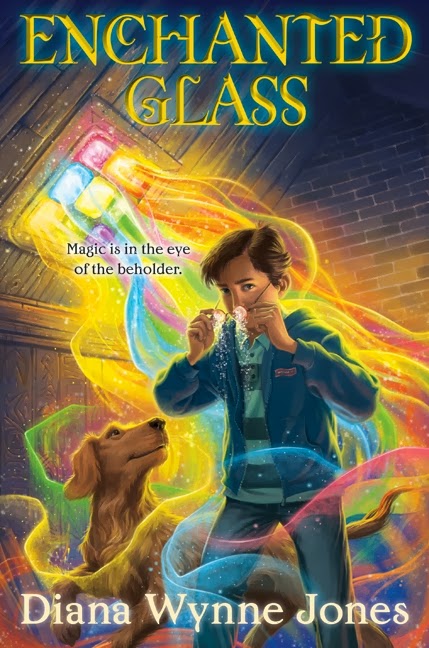 Please feel free to discuss this story any way you would like on your blog or here in the comments (or anywhere else you choose). Here are a few questions to get discussion started. Feel free to answer some or all of them here or on your own site.

2. What are your thoughts on DWJ including a disabled character (Tarquin)? What do you think of the treatment of his disability/injury?

3. What's the deal with Mrs. Stock? (Did anyone else want Groil to accidentally step on her?)

4. Why do you think some counterpart pairs are opposites in personality (Titania/Stashe) while others are both "good" (Shaun/Groil)?

5. What did you think of the ending? Too rushed or just right?

Here are my thoughts. There will be spoilers.

This was my third time through this book but I still didn't remember that last letter from Mr. Brown and didn't suspect anything about the Aidan/Andrew relationship. It was a pleasant surprise (again, I guess) except for the fact that you start thinking about Jocelyn Brandon being a creep. Up until that point, you kind of wish you had a chance to see/meet him and then, all of a sudden, you don't. Luckily, there's no chance of meeting him and so you're just left with Andrew and Stashe who are obviously going to do all the right things by Aidan.

I really liked Tarquin, both when he was living a productive life with just one leg and after, when he was (mostly) whole again. I do like that he still carried around the crutch and worried about the leg disappearing again though. It gave him more depth than if DWJ had just had Andrew wave a magic hand to make Tarquin hop and run about with no residual worries or anything. I also really like that Tarquin was such a good father. In fact, besides so many parents being dead in this story, there were actually good parents in the story (Trixie, Tarquin and Andrew as a surrogate) and the only bad one, Mr. Brown, was actually the villain. Even the foster parents were good to their children and were let off the hook about Aidan when it was revealed that he enchanted them.

As for Mrs. Stock, I still couldn't figure her out this time through. There is no apparent reason for her to be so vengeful and mean and stubborn. I guess it's just supposed to be her personality? I wish that you at least found out that she had been wronged or disappointed when she was young or something. On a side note, does anyone out there really like cauliflower cheese?

I found the counterparts to be a really interesting part of the story, especially because characters would momentarily mistake them for their friends and family, even with missing facial hair or different clothing styles or whatever, which makes me think that there was something essential in their beings that radiated a sameness that was more than just cosmetic. I've always thought of doppelgängers as "evil twins" but it does seem more likely that, when duplicating a person from faerie to the real world, there's just as much chance that they would have similar personalities as opposites, or even more likely that they would just end up being a shade different. Maybe this explains Mrs. Stock? I don't think we ever saw a counterpart for her but maybe she ended up being just as disagreeable as her faerie counterpart, just as Groil and Shaun were similarly pleasant, with no real reason?

Finally, I remember the ending seeming very rushed the first time I read this story but this time I didn't feel that at all. Either I'm finally acclimated to the pace of DWJ's endings or this one has a large finale but not necessarily a rushed one. It certainly is a big and amazing and abrupt ending but there's the foreshadowing of the racing results and also many hints that the story is going to come to its climax at the fete.

Overall, this reading just reaffirmed that this is one of my favorite DWJ stories. What did the rest of you think?
Posted by Kristen M. at 12:12 AM