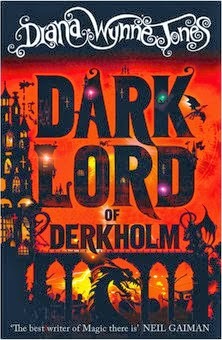 Though meant as a spoof of a high fantasy novel, the main theme of it is actually the family relationship between Wizard Derk, his wife Mara, and their children -- both human and griffin. Derk's special talent is the ability to make things grow, things being both plant and animal. He has many experimental animals in the yard--horses with wings, invisible cats (that might not be in the yard anymore), flying pigs and more--but only one of his creations was given human DNA and those are the griffins. When the world is threatened by a ruthless man from a parallel universe and his "Pilgrim Parties" into the realm, the entire family will have to come together to make things right. And they're not perfect--sometimes far from it--but even in the darkest times they can count on each other.

Derk’s youngest griffin daughter Elda goes to University to learn how to be a wizard. The book is all about the troubles that she and her University friends have. All of her friends have troubles. Lukin is an impoverished Prince, and his father doesn’t want him to come; Felim has crept away from the Emirates in secret and has assassins after him; Ruskin has been sent by a tribe of dwarf revolutionaries; Olga is the daughter of a totally wicked pirate; and Claudia is the half-sister of the Emperor of the South, and she is a half-breed so the Senators all don’t want her. (summary by Jenny)

Share your Dark Lord of Derkholm and Year of the Griffin love today!
Posted by Kristen M. at 12:12 AM