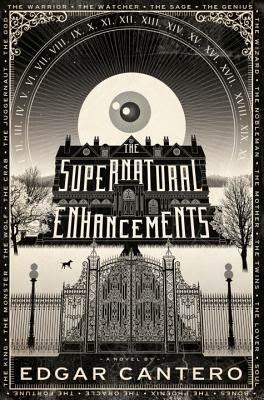 The second I saw Edgar Cantero's The Supernatural Enhancements, I knew I had to read it. I managed to avoid all mention of what it was about (because who needs any more impetus than that cover, right?!) and only took in the praises of various readers that I respect. I put in my hold at the library and thankfully it came in quite quickly (I can only assume because everyone who picks it up speeds through it without being able to put it down).

I'm going to be a bit secretive about the plot because, as I was tweeting with Becca about it (she was reading it at the same time), I realized "I like the way it reveals things slowly, after you've already assumed something else". I think this is definitely part of the genius of Cantero's writing. The story is told through letters, journal entries, and audio and video recordings. It incorporates literature, puzzles and cyphers, and nameless things that are only to be found in dreams and nightmares. The two main characters, A. and Niamh, are young and slightly mysterious and likable. And Axton House with its supernatural enhancements is a place of history and mystery.

As soon as I finished the book, I went to my reading spreadsheet where I usually record a couple of brief thoughts. All I could come up with was "holy crap". I tweeted this thought and the author himself found my tweet. He asked if it was the sort of crap he should retweet or not. I chuckled and said that it was absolutely the kind to retweet because I loved the book and the end was simply mind-blowing. I didn't see it coming at all. I would love a sequel that just expands the Epilogue.

I've already got Chris reading this book (and the last time I talked to him about it he was loving it). Have I convinced you to pick it up?

Cherishing my quiet dreams,
K
Posted by Kristen M. at 12:42 AM