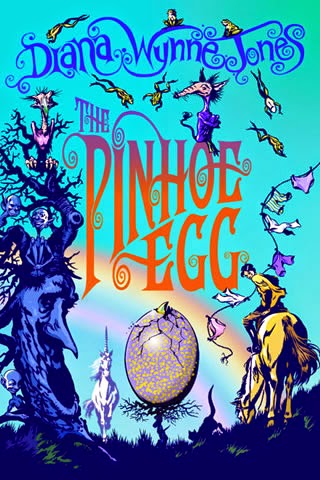 After being sidetracked by Conrad's Fate, I continued in my Chrestomanci Volume III and reread The Pinhoe Egg. I have to say that I kept seeing parallels between characters in this story and ones from other DWJ books. It makes sense though because this is a late story, published in 2006. It's still delightful and I love the new magics that DWJ wove into the Chrestomanci world in this tale.

Though this is the 6th Chrestomanci book, it would work perfectly well as a stand-alone. You learn enough about the recurring characters to not be confused and there are plenty of new ones that everyone is just getting to know for the first time. There are lots of threads in the story -- Cat and his further exploration of his enchanter's magic, Roger and Joe and their creation of a new magic, Marianne Pinhoe and her discovery of her true magic, and then the revelation of the workings, good and bad, of the hereditary magic, or dwimmer, of the Pinhoe and Farleigh clans. I know this might seem confusing but it is actually quite easy to follow because of Diana's brilliant storytelling.

Marianne is the most interesting character in the story after Cat. She's coming of age but is treated like a useless, irresponsible child. Her father is quite awful and her mother is apathetic at best. I love watching her blossom though under the influence of Cat, who also comes to terms with some of the abuse from his own childhood. It's a much deeper message than one would think would be delivered in a story of magic with creatures and curses and children.