#DWJMarch: The Time of the Ghost 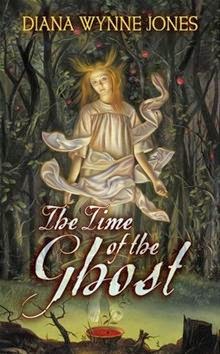 My first read for DWJ March is one I have only read once before, The Time of the Ghost. I remembered being uncomfortable while reading the book the first time but not much more about it. Well, it turns out that I was uncomfortable reading it again. It's a strange, disorienting story that has strengths but also a couple of weaknesses (like the fact that I still can't place the sisters in age order). It is probably my least favorite DWJ but, considering that I love, love, love so many of the others, "least favorite" isn't that bad.

Charlotte (Cart), Selina (Sally), Fenella, and Imogen are sisters that live with their mother and father at a boys' school. They're woefully neglected, even to the point of the parents not noticing that one of their daughters isn't there anymore. When a ghost shows up at the house/school, it's not sure who it is or why it's there -- except she thinks that she is one of the sisters, that there has been an accident, and that an evil and ancient entity is responsible for it.

I'm not a huge fan of horror and, though this story is a mix of fantasy and horror, there are parts of this story that are violent and/or bloody enough to make me squeamish. And yet, the real horror comes from the terrible parents, especially their father, Himself. He calls his daughters bitches, hits them repeatedly, and can't even tell the four of them apart (even when there are only three of them present). Diana revealed that the book was based on her own childhood with her two sisters and her negligent parents. Neglect and abuse are two different things though and I hope that she didn't suffer quite as much as these girls did.

What really stood out to me, though, were the relationships between the sisters. They bickered, they complained, they shouted and threw things, but, in the end, they all were there for each other. They represented a range of body types, a range of personalities and faults, and a range of talents, but their differences all became trivial when they needed to focus on something bigger together. Some very unbelievable things happened in the story and yet they believed each other and immediately stepped up to support each other. I'm sure this was the message that Diana intended to deliver, one that she learned in her youth.

Side note: I meant to re-read this earlier because Neil Gaiman cited it as an influence on The Ocean at the End of the Lane and I definitely saw that. BUT, I also thought there were some connections with The Graveyard Book (specifically, The Sleer) that I'll have to ask him about someday!

Invoking nothing and nobody,
K
Posted by Kristen M. at 12:12 AM