Upcoming Release: The Fangirl's Guide to the Galaxy


Almost immediately upon receiving The Fangirl's Guide to the Galaxy: A Handbook for Girl Geeks, I knew that Sam Maggs was someone who would understand me. I knew it because she created this, THE GEEK GIRL'S LITANY (which you can also watch above), which is right on the back of the book --


I am a geek girl and I am a feminist.
I embrace the word "fangirl" with open arms.
I don't have to prove my nerd cred to anyone ever.
Whether I'm a comics n00b, or a fic writer typing up her next chapter, or a hardcore gamer who sometimes forgets to sleep (not that I ever do that), no one else gets to decide whether I do or do not belong.
From SuperWhoLock to Shakarian I accept all fandoms and ships as equally meaningful and important in our geek girl lives.
Even if your OTP is my NOTP, I will still like you (though I may have to unfollow your blog).
I will support empowering, lady-created media and amazing female characters that make me feel like I could be Batgirl, if I just had some yellow Doc Martens and a vigilante complex.
I'm the Doctor, not a companion; Buffy not Bella; nobody's sidekick, love interest or token female.
I'm driving this ship.
I'm a fangirl, a feminist, and a force to be reckoned with.

I've known inside for years that I was a fangirl but I also felt like I was a bit shabby at it. I don't really collect anything besides movies and books. I never write fan fiction or ship any characters (except for frequently imagining myself, Oliver Queen, and a salmon ladder in the same room ... ahem). I have never attended a con. I don't have any geeky tattoos. I don't even know half of the acronyms that the twitter-residing fangirls use.

Now I have validation from Sam Maggs that loving the things that I do love in the way that I love them is enough. My simple Doctor-Hoo shirt is just as valid as someone else's amazing Tardis dress. Watching every Studio Ghibli movie chronologically counts the same as having, admittedly, the coolest Totoro bed in the world. And having watched every Star Trek episode (except any of Enterprise ... blech) is as Trekkie as putting on a tiny red dress or prosthetic ears. Every kind of fan and geek is authentic, and, if each fangirl and boy everywhere (including me) abides by Sam's rules about being respectful and kind to other fans, we can all live in a great big, beautiful, nerdy world together. 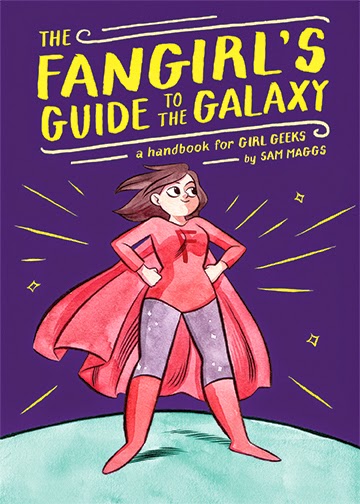 So, what else is actually in this book besides validation? Intros to a few fandoms, some slang terms, interviews with geek goddesses, tips about fan fic and cons, and lots more. There's tons of goodness in this tiny book and I highly recommend it to all fangirls and guys, both aspiring and pros.

Normally I don't post early about books -- and this one isn't out for two weeks (May 12) -- but Quirkbooks has a great pre-order deal going where you can score swag. Check it out if you're interested!