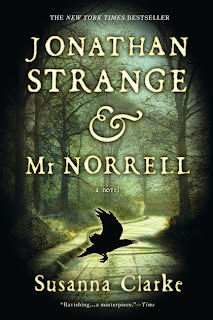 I've wanted to reread Jonathan Strange and Mr. Norrell, well, pretty much since I first read it (probably in 2004 or 2005 when it was still new).  I have to admit I was a bit nervous though because many readers through the years have decided they couldn't get through it, with its copious footnotes and details. I thought maybe my memories of it were more glowing than the book itself. But, the new BBC miniseries prompted me to get to it now and, though it admittedly took me a couple of weeks to get through it, I enjoyed it again just as much as I remembered having done the first time. It is a glorious novel that builds an entirely believable hidden world of magic, just out of focus from our own world.

The seven-episode miniseries has begun airing this week in the UK and will show on BBC America in the US starting on June 13.


... But nothing, I find, has prepared me for the sight of my own characters walking about. A playwright or screenwriter must expect it; a novelist doesn’t and naturally concludes that she has gone mad. (What do they need so many umbrellas for? Don’t they realise that they are imaginary?)

... In the part of Wentworth Woodhouse that has been made to look like the House of Commons, Sir Walter Pole smiles and saunters over to speak to me. In a ballroom of immense magnificence Lady Pole and Mrs Strange perform a dance of their own invention; it is both graceful and funny. (Later someone will give me a photograph of it.) Stephen Black looks grave and self-possessed and keeps to the shadows. Childermass – in straightforward Yorkshire fashion – shows me his tarot cards and lets me hold them for a moment: they feel warm and pleasantly rough in the hand. Out of the assembled ranks of fairy dancers the gentleman with the thistle-down hair gives me a friendly wave. (This last, I am willing to admit, is not the least in character.)


In February 2004, to my perplexity and my delight, the mail brought an advance, but finished, copy of Jonathan Strange & Mr Norrell. I took my daughters on holiday to the Cayman Islands, and while they romped and swam in the surf, I was hundreds of years and thousands of miles away, in Regency York and in London and on the continent, experiencing nothing but the purest pleasure, wandering through the words and the things they brought with them, and eventually noticing that the paths and lanes of the story, with its footnotes and its fine phrases, had become a huge road, and it was taking me with it: 782 pages, and I enjoyed every page, and when the book was done I could happily have read 782 more. I loved the things she said and the things she did not say.

Perhaps some of you that didn't get through the novel will feel inspired to pick it up again after the miniseries. It's getting favorable reviews claiming that it is true to the book, something that we all hope for every time we see an adaptation being made. And perhaps others of you will do as I did and pick up your already beloved copy again and disappear into the world of magician Jonathan Strange and his mentor, Mr. Norrell.