RIP X: 12, The League of Beastly Dreadfuls and 13, Sad Cypress

My last two RIP reads have nothing in common but it's time to wrap this month up so ... 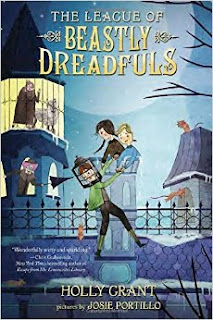 The League of Beastly Dreadfuls by Holly Grant is a middle grade fantasy/mystery that is a bit uneven and leaves too many threads hanging at the end. I wanted to love this book but it feels badly edited and Anastasia, the main character, is a bit of a dummy. She's at school one day when the school secretary comes and takes her out of class with the news that her parents have been in an accident. She's told that her "aunts", two women she's never seen, met, or even heard of, are there to pick her up. She takes the bait and leaves the school, only to find herself in an abandoned Victorian mental asylum, locked in a mildewy bedroom, and wondering if her parents are okay. And yet, for a significant amount of the book, she finds her situation unfortunate but not strange. I just didn't get it. And things were left open at the end for an obvious sequel/series but in a way that you still know nothing about why any of this happened to her. I'm not sure if I will read book two when it comes out or not. 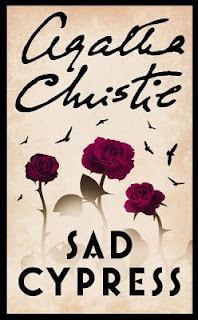 I put off reading the last few Poirot novels that I had on my shelf because I had watched the television series first and so I knew all of the plots. But enough time has now passed that I was able to pick up Sad Cypress and not know what was going to happen. This one is a riff off of the old country house murder -- three women in a house, one ends up dead. Did Elinor really kill Mary out of jealousy? Eventually Poirot is brought in to figure it out. This was a standard Christie -- not one of her best but still entertaining and a good way to end the RIP season.

Returning to peril-less reads,
K
Posted by Kristen M. at 12:24 AM